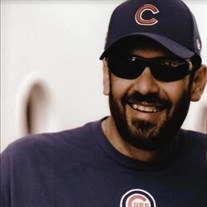 Anthony Wayne Chick, 50, St Augustine, FL died unexpectedly in his home on Saturday Nov 14th. Anthony was born in Harford City, IN, graduated from Blackford High school and joined the Navy in 1988. He proudly served his country for 20 years as an Aviation Electronics Technician First Class. He retired to Jacksonville, FL. In 2010 he met Jean, became a husband and an instant father figure to her two children, Zoe and Zachary. Tony enjoyed his life and the time he spent watching Zoe cheer, dance and play softball. He coached many of Zachary’s baseball teams and even coached the one season of tackle football Zach played. His world revolved around Jean and the kids. There’s so much that could be said about this wonderful, sweet, caring, loving man. Jean couldn’t have asked for a more wonderful husband, father figure and role model for her children. He completed her family as from day one it felt like they had known each other forever. He was her best friend, her laughter, her biggest supporter and the air that she breathed. If you met him even once he left an impression on you and you couldn’t help but to like him and would never forget him. He could make you smile and laugh even when you didn’t want to. He was always so full of life and most of all love. If you were fortunate to know Tony, you were better for it. Everyone’s hearts are broken and smiles these days don’t reach their eyes. We lost so much when we lost him... a husband, father, brother, son, coach and friend. He was sunshine on a cloudy day. Tony is survived by his wife Jean Abbatinozzi-Chick, two children Zoe and Zachary Zimmerman, parents Don and Darlene Chick, Connnie and Lee Sharp, siblings Ryan Chick, Matt Sharp, Heather Armistead, Aaron Hatton, Eric Hatton. Tony’s memorial service will be held at Craig’s Funeral Home (1475 Old Dixie Hwy, 32084) on November 30th, 10:00 am followed by the inurnment Jax National Cemetery, 2:00 pm. Everyone is invited after back to our home at 315 Whisper River Drive, 32092.

Anthony Wayne Chick, 50, St Augustine, FL died unexpectedly in his home on Saturday Nov 14th. Anthony was born in Harford City, IN, graduated from Blackford High school and joined the Navy in 1988. He proudly served his country for 20 years... View Obituary & Service Information

The family of Anthony Wayne Chick created this Life Tributes page to make it easy to share your memories.

Send flowers to the Chick family.