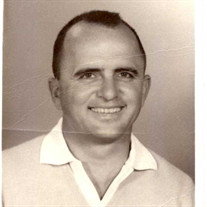 Retired Federal Official, Arthur J. Fistori, (97), died on August 16, 2021 in Jacksonville, FL. He has recently moved to Ponte Vedra, Florida in 2019, but had been a resident of Mt. Laurel, N.J. since 1970. He was a native of Worcester, Mass. As Region Deputy, Mr. Fistori served for fifteen years as the Chief Civilian Employee of DCASR, Philadelphia, A Department of Defense Activity Responsible for the Administration of defense contracts throughout six mid-atlantic states and the District of Columbia. He retired in 1985. A graduate of the University of Maryland and the American University Law School, he was a member of the District of Columbia and Florida Bar Associations, and also served briefly as a Municipal Judge in Satellite Beach, Florida. Wounded in Germany during WW-II, Mr. Fistori was awarded the Combat Infantry Badge, Purple Heart, and Bronze Star. During his government service, the Defense Supply Agency awarded him the Meritorious Civilian Service Medal and the Exceptional Civilian Service Medal. He also received numerous letters of commendation from former Secretary of Defense Melvin Laird and others for exemplary performance of duties. A bookaholic and punster, Mr. Fistori unflinchingly describes his lifelong enthusiasm for golf and fishing as his quest for "BOGEY 'N' BASS". He is survived by his wife, Martha (Holt), Sons, James (Terry) and John (Allison), Daughter, Nancy (Terry), Grandchildren, Jacqueline (Jeff), Morgan, Levi, Rachel, Terry, Brother Phillip, Sister Diane (Dennis), Sister Celine (Wayne), Sister-­in-law, Nancy Fistori, Sister-In-Law Nancy Stearman, as well as many nieces and nephews. He was pre-deceased by his parents Philip and Anne and brother Paul. Relatives and friends are welcome to attend services on September 4, 2021 at 11AM at Craig Funeral Home, 1475 Old Dixie Hwy. St. Augustine, FL 32084. The service will be live streamed at the link below. https://view.oneroomstreaming.com/authorise.php?k=1630110630133353 In lieu of flowers those wishing may make a donation in his memory to the Clyde E. Lassen Veterans Nursing Home.

The family of Arthur Fistori created this Life Tributes page to make it easy to share your memories.

Send flowers to the Fistori family.