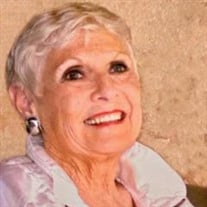 Betty Jo Holt Grazier, June 7, 1932-May 5, 2022 Mrs. Betty Jo “BJ” Holt Grazier, 89, of Jefferson City, MO and St. Augustine, FL, passed away on May 5, 2022, in St. Augustine, Florida. She was born June 7, 1932, in Jefferson City, Missouri, a daughter of Joseph Raymond “Jie” Holt and Ollie Imogene Thompson Holt Hayes, who preceded her in death. She was married on February 10, 1951, at Central United Church of Christ to George S. Grazier, who preceded her in death on September 8, 2008. A lifelong resident of Central Missouri Betty Jo was a 1950 graduate of Jefferson City High School. While in high school she worked in the office for Superintendent Joe Nichols as a student staff member. Betty Jo was a Cubs and Jays cheerleader for the JC Football, Basketball and Track Teams, a member of the JCJC Student Council, girls volleyball and basketball teams and was a member of the MEW Sorority. She also was on the Marcullus Queen Court of 1950. Betty Jo was a member of The Central United Church of Christ, confirmed in 1946. She sang in the children’s and junior choirs. And she was a member and an officer of the Jefferson City Assembly Order of Rainbow for Girls #16. She was a member of the 1st Jefferson City Youth Council of Clubs for JC High School and St. Peters High and a member of the 1st JC Teen Town organizational board. Betty Jo began her professional career at the Kansas City Crime Commission, KC, Mo. After relocating back to JC, she was employed by the Missouri State Chamber of Commerce and the Missouri State Highway Patrol where she worked for the late Col Hugh Waggoner as a receptionist, switchboard PBX and teletype operator for GHQ. She worked the switchboard during the Missouri State Penitentiary Riots of 1954. Betty Jo later was appointed Missouri State Publicity Chair of the Missouri March of Dimes where she coordinated with former first Lady and state representative Betty Hearnes the Mother’s March Tea at the Governor’s Mansion. Betty Jo was a member of many civic organizations, including the Columbia Women’s Club, PTA and was a troop leader for the Girl Scouts of America. She and George were founding members of The Friends of Rocheport, Rocheport, MO, and the California Caballeros (a youth saddle club) while living in California, MO. Betty Jo was also a member of the Columbia Chapter of the DARs. She took great delight in genealogy preservation and history. While living in California she renovated a century old home “Rice House” which is now on the National Register of Historic Places. Betty Jo received resolutions from the Missouri Senate, House of Representatives, and the Governor on her lifetime of accomplishments Affectionately called “Miss Betty Jo” by her beloved husband Missouri Highway Patrolman George S. Grazier. George was her high school sweetheart, best friend, soulmate, and love of her life. Betty Jo was a true supporter of the MSHP and was extremely proud of George and his association of 35 years as a “gentleman who enforced the law”. They both cherished time with their families and for them and their daughters the Patrol was never a job but their way of life. They shared a wonderful marriage of over 57 years. Betty Jo was selected California’s Woman of the year and in 1971, her family was chosen to represent the State of Missouri at the All-American Family Pageant held in Lehigh Acres, Florida. Betty Jo was honored to be chosen runner-up for Mrs. U.S. Savings Bond during the pageant. Most importantly, Betty Jo loved and cherished her family and treasured the memories made with them. Survivors include: two daughters, Georgia Gayle Grazier Nick and her husband Joe, Cheryl Elizabeth Grazier, her niece Debbie Asher Mullally and her daughters Ashley Vincent and Erin Schrimpf and their families, brother-in-law, Gerald (Jerry) Grazier, sister-in-law, Sharon Grazier Rimel and her family, sister-in-law Sandy Holt and her family, her Cousin Betty Stoll and her husband Jim and their family, many nieces, and nephews and, special family friend Kendra Tallman. She was preceded in death by her husband of 57 years, George S. Grazier, her devoted sister, and life-long best friend Dorothy Lee Holt Burkel, brother Gene Holt, brother-in-law Don Burkel, brother-in-law William Rimel, brother-in-law James Grazier and his wife Linda Schneider Grazier, sister in laws Betty Grazier Wright, Donna Grazier Roush, and Helen York Grazier and nephew Stephen G. Asher. She will be dearly remembered and profoundly missed, and she will live on in the hearts of all who knew and loved her as a heroine of inspiration. Funeral arrangements are under the direction of Craig Funeral Home in St. Augustine, Florida if you wish to leave a condolence, please visit https://www.craigfuneralhome.com. A private memorial will be held by the family at a later date with internment at Hawthorn Memorial Gardens in Jefferson City, Missouri. It is suggested that those wishing to honor Betty Jo donate to the 10-33 Benevolent Fund, or the Central Church Choir Fund.

The family of Betty Jo Grazier created this Life Tributes page to make it easy to share your memories.

Send flowers to the Grazier family.