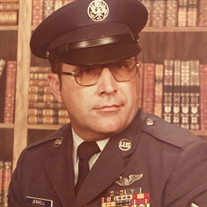 Carl E. Jerrell, known to all as Sonny, passed away from this world to his heavenly home, where he joins his son Gregory, who passed away March 1, 2021. Sonny was born in Williston, Florida to Henry and Wilma (Sapp) Jerrell. He graduated from Williston High School in 1958. Soon after, Sonny enlisted in the United States Air Force. He enjoyed many overseas assignments to include Karamursel AFB, Turkey and Clark AFB, Philippines. It was during his assignment to Elmendorf AFB, Alaska where he would discover his passion for fly fishing and hunting. Sonny was a Vietnam Veteran, and proudly served as a morse code intercept operator. He retired with the Electronic Security Command in 1980. After his military retirement he worked for the United States Postal Service, where he enjoyed interfacing with the local community and retired in 2000. In his younger years, Sonny enjoyed dabbling with various instruments including the electric guitar. He was quite the comedian, oftentimes laughing so hard at his own jokes. Sonny was also known as the best poker player. Later in life Sonny loved gardening which yielded the most delicious and plentiful vegetables. He also had a passion for fishing, whether it be alone, with his sons, brother or grandchildren. His fishing endeavors provided for some great fried fish dinners, and a few exaggerated catch stories. Sonny is preceded in death by his parents, siblings and son. He is survived by Jean Bryan Jerrell, his high school sweetheart and wife of 62 years, his daughter Janet B. Wilson (Mark) of St. Augustine, FL, son Brandon Pickell (Amanda), of Leola, SD, daughter-in-law Mary B. Jerrell of Raleigh, NC, eight grandchildren; Amanda Walters (Kenneth), Tyler Jerrell (Sara), Nathan Jerrell, Alyssa Jerrell (Arthur), Skylar Bennett, Rachel Pickel, Brandon Pickel II, Colt Pickel, and three great grandchildren; Holden and Ainsley Walters and Adrian A. Schechter. The family wishes to thank the caring staff at Clyde E. Lassen State Veterans’ Nursing Home, where Sonny resided for the last 5 years. In lieu of flowers please consider donations to the Alzheimer’s Foundation; https://alzfdn.org/ or charity of your choice. There will be a viewing, Wednesday, April 6 from 5-7 p.m. at Craig Funeral Home in St. Augustine, Fl. Graveside service with military honors and internment will take place Thursday, April 7 at 12:30 p.m. at the Jacksonville National Cemetery.

Carl E. Jerrell, known to all as Sonny, passed away from this world to his heavenly home, where he joins his son Gregory, who passed away March 1, 2021. Sonny was born in Williston, Florida to Henry and Wilma (Sapp) Jerrell. He graduated from... View Obituary & Service Information

The family of Carl "Sonny" Jerrell created this Life Tributes page to make it easy to share your memories.

Carl E. Jerrell, known to all as Sonny, passed away from this...

Send flowers to the Jerrell family.