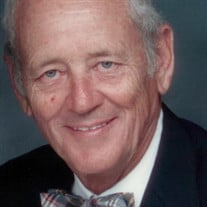 Carlton Ivory Crabtree died on July 25, 2021, at the age of 101. He was “born on a mountaintop in Tennessee” (Chitwood Mountain to be precise). The middle child of 13, he grew up on the land his Appalachian ancestors settled in the late 16th Century. His father died when Carl had just entered adolescence, and was sent to Berea Academy and College as a boarding student. During his tenure at Berea, Carl worked nearly every job available to a student; the first-arriving breakfast prep cook, to a fireman in the town’s only fire brigade. He was on the swimming and diving team and worked the newspaper printing presses, among many other college obligations. Berea helped formed Carl’s lifelong dedication to work, learning, and character. While attending Berea, on summer break in the late 1930s, Carl met the love of his life, Doris Pierce at a summer resort where they both worked. Due to their diving skills, management paired them up to perform for guests as pool-side entertainment in a “Brother-and-Sister” diving act. Carl and Dori eloped to Tennessee on New Year’s Day 1940, then moved to Detroit where Carl worked as a Typesetter for the Detroit Free Press. During World War II, while he was an Officer in the U.S. Maritime Service, they moved to Dori’s hometown of New London, CT. In 1943 their son Carlton Pierce was born. In 1948, their daughter Carolyn was born. Five weeks later, they moved to Miami, where Carl began a career with Standard Oil. He rose through the ranks, working and living in San Francisco, Tennessee, and then Kentucky where he presided over the Merger of Standard Oil of Kentucky (KYSO) and Chevron as a Division Manager. In 1976, after surviving a major heart attack, he retired from Chevron, and he and Dori moved to St. Augustine, where they lived for the next 45 years. Carl was an avid golfer and one of the first members of Marsh Creek Country Club, and eventually earned the title of “oldest active member”. All who knew Carl: family, friends, and business associates, greatly admired him for his truly memorable gifts. He was a man of impeccable comedic timing, boundless charisma, a beautiful singing voice, sapphire blue eyes, broad shoulders, and seemingly infinite patience and kindness. His beloved best friend and wife Dori died in October 2015, the year of their 75th wedding anniversary. He was preceded in death by his parents Andrew Jackson and Emma Crabtree; his siblings: Ruby, Paul, John, Ted, Ernest, Ethel, Juanita, Lucille, Andy, Delora, Duane, and Bill. He is survived by his son Carlton Pierce Crabtree of St. Augustine, Florida, and daughter Carolyn Crabtree Garvin (Tom) of Boulder, Colorado; grandchildren Carlton Crabtree (Erin), Christy Sinkey (David), and Travis Garvin (Erin); great grandchildren Georgia Sinkey, Carly Sinkey, Julia Sinkey, Renee Garvin, and Paul Garvin, who all loved and treasured him beyond description. Carl Crabtree was a truly successful man. But with all the depths and heights he experienced, none compared to what his family meant to him. From childhood to his last breath, the most valued gifts he’d been given were his wife, children, grandchildren, and great grandchildren – his greatest joy.

Carlton Ivory Crabtree died on July 25, 2021, at the age of 101. He was &#8220;born on a mountaintop in Tennessee&#8221; (Chitwood Mountain to be precise). The middle child of 13, he grew up on the land his Appalachian ancestors settled in the... View Obituary & Service Information

The family of Carlton Ivory Crabtree created this Life Tributes page to make it easy to share your memories.

Send flowers to the Crabtree family.