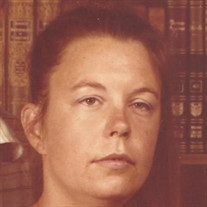 Carolyn Dill McElroy of Elkton passed away peacefully October 7 th , 2021 at Flagler Hospital in St. Augustine, FL. Born February 22 nd , 1946 in Pikeville, TN to parents Anderson M. Dill and Needola S. Bledsoe, she spent her first few years in Pikeville before her family moved to Dunedin, FL. There she grew up making lifelong friends, attending local schools and becoming an X-RAY Technician fulfilling her career goal. In her early 20's she spread her wings landing in St. Augustine and began working in the Radiology department of the Flagler Hospital on Marine St. In the spring of 72 she met her future husband and lifelong partner Kevin. They were married in February of 73 and made their home in Araquay Park on the property he owned. She continued to work at the hospital until the birth of their twin girls in July of 76 becoming a full time mother of two and homemaker. As time went on two sons were added completing her family at the time. The kids grew up and she was blessed with five grandkids to chase after. They called her "Nana" and she loved having them around all the time. Her family was everything to her as she was to them; the void she leaves will never be filled. Our beautiful angel is in Heaven and will always be in our hearts and memories forever. Carolyn was a woman of modest means; she asked for little and gave a lot. She liked to read, do crossword puzzles, and watch her Father Brown mystery series, but above all else, spend time with her family and friends. She was preceded in death by her parents and sister, Diane Tymeson. She leaves behind her husband Kevin, children Michele, Natalie (Courtney), Shawn, and Wade, brother Monty Dill (Germaine), grandchildren Braden McElroy, Camille Olson, Audre Westerwell, Hailie McElroy, and Gabriel Hughes, along with Sisters-In-Law Donna Lehman (Terry), Kathy Mulally (Ray), Laura Dill and numerous nieces, nephews and friends. The family would like to extend their deepest gratitude to the Doctors, Nurses, and Medical staff of Flagler Hospital, especially the ICU ward, who took care of Carolyn during her final days; God bless you all. Per her wishes, no formal services are planned. A family celebration of her life will be held at a future date. Her family respectfully asks for privacy during this difficult time.

The family of Carolyn Dill McElroy created this Life Tributes page to make it easy to share your memories.

Send flowers to the McElroy family.