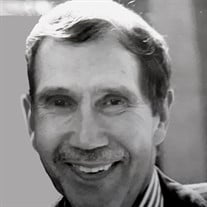 Charles Nathaniel Carter, 87, passed away peacefully on September 12, 2020 at the Community Hospice Center in St. Augustine. He was born August 28, 1933, in Providence, Rhode Island, the son of Maxwell and Sarah Carter (née Silverman). Charles was raised in Providence, attended Hope High School and went on to earn a B.A. in Business Administration from Bryant College. He also served in the U.S. Army, where he was stationed in Mainz, Germany for approximately two years. After working for a short time for the Warwick Beacon newspaper, Charles began a long career in sales, first with Castro Convertibles and eventually with Ethan Allen Furniture, where he remained until his retirement in the early 1990s. Soon after the death of his wife of 30 years, Leslie, he relocated to St. Augustine. He led an active life there for many years volunteering for and donating to numerous organizations he cared about such as H.A.W.K.E. Wildlife, the Betty Griffin Center, the Council on Aging (COA), Meals on Wheels, the EMMA Concert Association, and the St. Augustine Public Library. He was also a member of the Unitarian Universalist Fellowship of St. Augustine. A soft spoken and gentle soul, Charles had a passion for books, sports (especially the Boston based teams), film and art and filled his home with an eclectic mix of paintings and prints. Late in life he took up drawing and was particularly fond of creating unique cartoons based on current events with his own sociopolitical commentary as well as portraits of friends and acquaintances and whimsical animal characters. He happily shared these with the community, and it was not unusual to go into an office or home in town and see his creations on display. Charles leaves behind his wife, Almadean Williams, a brother, Allan Carter (Gina) of Kingston, Rhode Island, a daughter, Lisa Carter of Hamden, Connecticut, a stepdaughter, Cassie Petersen of Dresser, Wisconsin, a stepson, Ted Williams of Seattle, Washington, and numerous friends at the Allegro Senior Living Community in St. Augustine, where he last resided. In lieu of flowers, donations in his memory may be sent to either H.A.W.K.E. Wildlife or the Unitarian Universalist Fellowship of St. Augustine.

The family of Charles Nathaniel Carter created this Life Tributes page to make it easy to share your memories.

Send flowers to the Carter family.