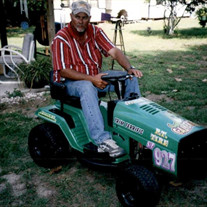 On August 24, 2021 , This world lost a Very Special Person. Charles ( Chuckie ) Elmo Masters, Jr. left our world to move on to heaven to be with his father , Charles Elmo Masters , who had preceeded him and gone on to glory some years ago. Chuck was born on August 9, 1960 to his mother Alice and his father Charles in Fort Pierce , Florida. Chuck spent the majority of his years in St. Augustine , where he loved racing and especially his racing mower . Chuck lived with his mother Alice , and his step-father , Joe, who , Joe, has also moved on to glory . Chuck was always there for his mother , Alice , whom he loved with all his heart and was right by her side when she had a need for anything. Chuck and his mother, had a bond between themselves like no other . Chuck was the type of person who loved his friends and family so very very much and if anyone ever had a need , he would be right there to give of himself in any way he could. If you ever met Chuck then you had just gained yourself a wonderful friend. Thru the years , Chuck had some struggles with some health issues , but he would always pull himself up and be there for anyone who needed him , no matter how he was feeling personally. Chuck was an amazing person to be around, from his fantastic cooking , to his sometimes sarcastic humor which everyone loved about him , to just having the joy to be with him. Chuck also lived on the same property where his sister, Tina , her husband and his son lived , and not a day would go by that he wouldn't make sure he would say hello in some form or another. If there was ever a fantastic , loving, caring person that you would ever want to meet, It would be Chuck. This world lost a truly special person , when it lost Chuckie , things will never be the same and some scars can never heal , when you lose someone like " Our Chuckie " . Chuck leaves behind , his Loving Mother , Alice, his adoring Sister, Tina , a heart-broken brother-in-law, Billy , step-sister, Sherry , step-brother JJ , aunts , uncles , numerous cousins , niece and nephews and more friends than you can count. So many hearts broke on August 24th and so many will miss Chuckie as long as we are here on this earth. " We Love You and Miss You Chuckie " Funeral service will be 12PM Wednesday at Craig Funeral Home with a burial to follow at Craig Memorial Park. Service will be live streamed at the link below https://view.oneroomstreaming.com/authorise.php?k=1630436789133975

On August 24, 2021 , This world lost a Very Special Person. Charles ( Chuckie ) Elmo Masters, Jr. left our world to move on to heaven to be with his father , Charles Elmo Masters , who had preceeded him and gone on to glory some years ago.... View Obituary & Service Information

The family of Charles Elmo Masters created this Life Tributes page to make it easy to share your memories.

Send flowers to the Masters family.