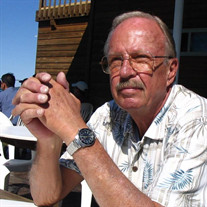 Charles “Chuck” J. Ostholm passed away on February 18, 2020 at Cypress Village in Jacksonville, Florida. Chuck was born in Detroit Michigan on September 24, 1939. He is preceded in death by his life partner and wife Jean Phyllis Ostholm (Herz), his mother, Rose Ann (Talick) Ostholm, and his father, Eric Gunnar Ostholm. A resident of Florida since 1982, Chuck lived in St. Augustine. Chuck served in the United States Army from 1957-1960, serving as a military police officer stationed in France. After serving his country, Chuck returned to Detroit, where he became a subcontractor installing carpeting. He then pursued a real estate license, following in the footsteps of his father and sold new homes for a couple of years. In 1974, Chuck started his own building company, a life-long dream, and became a general contractor building new single-family homes. He owned and was president of the Austin Construction Company for over 30 years. Chuck built homes in the Grand Traverse and Grand Rapids areas of Michigan. He later relocated his business to Brevard County (FL) and began building homes there in 1984. He branched out and continued to build homes in Volusia and Flagler counties until his retirement in 2007. Chuck was the commensurate provider and protector; he took care of others. To him, family was everything. Chuck was a devoted husband to Jean with whom he shared his life, along with 52 years of marriage. He was an exceptional father and role-model for his children Chuck and Karen and he was an active and loving grandfather to his only grandchild, Kinsey. Chuck was close with his siblings Shirley and Richard all his life. Chuck was a life-long avid shooter and was a member of the St. John’s County Fraternal Order of Police, Lodge 113. He was content with the simpler things in life and cherished most his time spent with his family; he enjoyed the beach, BBQs, boating and Gator Football, always with his family. Chuck is survived by his children, son Charles E. Ostholm (wife Patricia Ostholm), his daughter Karen E. Gilbert (husband Joseph Flynn), and his favorite granddaughter Kinsey Jean Gilbert. He is also survived by his sister Shirley (Ostholm) Hinnau and his brother Richard Ostholm. A memorial service to remember Chuck will be held on Saturday, March 7, 2020 at the Craig Funeral Home in St. Augustine at 2:00 pm. Immediately following the service, family will receive friends for a reception. In lieu of flowers, the family asks for donations to the St. Francis House in St. Augustine, a local organization that assists area homeless.

Charles &#8220;Chuck&#8221; J. Ostholm passed away on February 18, 2020 at Cypress Village in Jacksonville, Florida. Chuck was born in Detroit Michigan on September 24, 1939. He is preceded in death by his life partner and wife Jean Phyllis... View Obituary & Service Information

The family of Charles Chuck Ostholm created this Life Tributes page to make it easy to share your memories.

Send flowers to the Ostholm family.