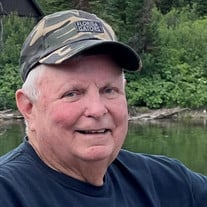 Colonel Charles “Frank” Riggle III, 77, died peacefully in his St. Augustine, Florida home on Friday, February 25, 2022. Frank was born on February 10, 1945 at Fort Gordon in Augusta, Georgia. As a toddler, he lived in Korea, where his father, Brig. Gen.Charles Riggle, served after WWII. After being offered a position in Mississippi, they settled in St. Augustine where his dad was assistant adjutant general for Air Florida National Guard. He graduated from St Augustine High School in 1963 and enlisted with the National Guard. Frank attended St Johns River Junior College before transferring to the University of Florida where he graduated in 1970. Active in his fraternity, he was a proud brother of Phi Kappa Tau, and served as President of the chapter. Shortly after graduating, he took a job with Bechtel in Bowie, Maryland, where he built nuclear power plants. Bechtel took the family to Vicksburg, Mississippi where he also served in the Army Reserves. After Bechtel, they moved to Gainesville, Florida where he worked for a construction company and owned a pool company, Palace Pools. It was then that he decided to become AGR (Active Guard Reserve) and moved to Atlanta, Georgia where he served at Fort Gillem. After a short stint in Chicago, Illinois, he received an honorable discharge with 33 years of service and retired back in St. Augustine. After retirement, he was an active member of Marsh Creek Country Club where he played golf and tennis. Frank loved playing cards at the Gun Club on Wednesday nights. In addition, he became involved in the community through many local charities. One of his favorite organizations to serve was the Betty Griffin House where he was instrumental in getting land donated by FEC (Florida East Coast) Railway and served as the general contractor for a new shelter and transitional housing. He also worked at Flagler College overseeing the construction of the Ringhaver Student Center, Crisp Ellert Art Museum, Molly Wiley Art Building & FEC Towers. He married Judy Hicks, from Glen St Mary, Florida on January 8, 1994 in Atlanta, Georgia. They met playing tennis at Hidden Hills Country Club in Stone Mountain. They shared a love of international travel, his gourmet cooking skills and watching their grandchildren in their sports events. In 2009, Frank suffered life altering injuries, including brain trauma, in an accident in St. Augustine. After incredible care and rehabilitation at UF Health in Jacksonville and the Shepherd Center in Atlanta, he continued to be an active part in his family’s lives. He is survived by his wife Judy, daughters Samantha (Chris) Faklaris, Meredith (Tom) Dunn, five grandchildren Lexy, Hannah & Abby Faklaris, Charlie & Julia Dunn, and the mother of his children, Susan McMunn Riggle, all of Atlanta, Georgia; his sister Janet Riggle Harding of Pocatello, Idaho and numerous nieces and nephews; and his beloved dog Henley. He is preceded in death by parents, BG Charles “Charlie” Frank & Dorothy Riggle and his stepmother Elaine Ringhaver Riggle. A service will take place at Grace United Methodist Church (8 Carrera Street St. Augustine) on Thursday, March 3 at 2pm In lieu of flowers, please honor Col C. Frank Riggle III memory by making a donation to UF Health Jacksonville’s TraumaOne Heroes Fund. Gifts may be mailed to UF Health Office of Development, 580 W 8th St P-20, Jacksonville, FL 32209 or by visiting https://www.uff.ufl.edu/give-now/?fund_id=017349. Please indicate that your gift is directed to UF Health Jacksonville & that it is in Col. C Frank Riggle IIIs memory.

The family of Charles Frank Riggle III created this Life Tributes page to make it easy to share your memories.

Send flowers to the Riggle family.