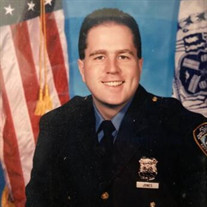 Christopher John Jones (Nov. 24, 1968 to May 30, 2022) Christopher John Jones passed away suddenly on Monday, May 30 – Memorial Day. Those who knew and loved Chris take some comfort that the day of his reunion with the Lord falls on the same day we honor fallen patriots of our nation. You see, Chris really did give all for his country, just in a policeman’s uniform instead of military one. On Sept. 11, 2001, when so many fled the crumbling Twin Towers in NYC, Chris raced toward them. Unfortunately, that calling would take an emotional and physical toll on Chris for the rest of his life. Chris’ story started in the “old neighborhood,” the Bainbridge section of the Bronx. “CJ,” as he was known to friends, would tell many stories about the shenanigans he and his buddies got into exploring back alleys, playing football and stickball in the streets, and hanging out at “The Oval.” To understand Chris is to have been on the receiving end of his fierce loyalty, generosity and fun -loving (Rock ‘n’ Roll) spirit. He would literally do anything for anybody at any time of the day or night they needed him – most especially his family and lifelong friends who were like family. Chris attended, first, St. Brendan Church’s parochial school and then Cardinal Spellman High School. He went on to Westchester Community College and then Iona College to study criminal justice. Chris joined the NYPD in 1996. His first assignment was not for the faint of heart. As a rookie, Chris patrolled the rough-and-tumble streets and housing projects of the 4-6 Precinct. His superiors were impressed by his natural abilities to develop rapport with people of all types and to dig up hard to find information. Promoted to Detective at just 25, Chris would go on to serve in the gang division, INTEL unit and Counter-terorism special assignments. Chris met the love of his life, Colleen, in 2002 and they married in Dobbs Ferry, N.Y., in 2004. They happily welcomed their son Aidan into the world in 2008. The bond these two shared was like no other. Not only were they spitting images, but whatever Aidan was into Chris wanted to be a part of it, from taking drum and guitar lessons to elaborate history projects and, of course, football. Coach Chris coached Aidan and his teammates from the Pee-Wee level of football all the way to two back-to-back championship seasons for the Gamble Rogers Stingrays. He took on many of the boys as if they were his own, especially reaching out to players who struggled a little harder to reach their goals on the field. Since moving to Florida, Chris enjoyed the many friends we made here, time with his beloved pup Indy, trips to Orlando, or just sitting poolside in the lanai. Chris is survived by his mother Patricia Murphy; stepfather Gerald Murphy; wife Colleen; son Aidan; brother James and wife Tricia; sister Stephanie and husband Daniel; nieces Michelle and Alyssa; and countless other relatives and friends he considered his family. He was predeceased by his father James Jones Sr. Christopher’s legacy lives on in the thousands of lives he touched – including those he bravely saved on 9/11. May you rest easy, our sweet Christopher, you’ve more than earned that rest. To quote his favorite heavy metal singer Ozzy Osbourne: “See you on the other side.” A memorial service in Chris’ honor will be held Friday, June 3, from 2 to 4 p.m. at Craig Funeral Home, 1475 Old Dixie Hwy, St. Augustine, FL 32084. Memorial donations may be made in Chris’ name to the “Never Forget 911 Foundation.” A memorial service will also be planned for family and friends in New York at a later date.

The family of Christopher John Jones created this Life Tributes page to make it easy to share your memories.

Send flowers to the Jones family.