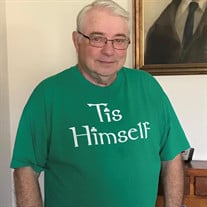 Christopher J. Robb passed away on Monday, February 14th. Chris is survived by his loving wife, Amye. Thursday, February 17th would have been their 49th wedding anniversary. Chris is also survived by his daughter, Michele, her husband, Rory, and their two boys, Colin Christopher and Riley Robert. All are proud to call St. Augustine, Florida their adopted home. Born in Toledo, Ohio, Chris led an amazing life filled with travel, teaching, and time spent with family and friends. By age 24, Chris had graduated from the University of Texas with a degree in journalism, where he was the first reporter to the scene during the UT Tower shooting incident. Chris served as an Army Counterintelligence Officer during the Vietnam era, where he made three trips into the Soviet Union on spy missions. After the Army, Chris moved to New York City where he became editor of a trade journal and met the love of his life, Amye. Chris's professional career included time as a Security professional and in the Hotel industry, where he served as manager of several departments. Since retirement in 2010, Chris worked with the IRS where he led volunteer tax programs for AARP and United Way. Chris received an award from United Way, the Gold Level Presidential Volunteer Service Award. Chris donated over 20 gallons of blood to the Red Cross and other organizations over the years. He was a 10th generation direct descendant of Myles Standish. Chris loved the Detroit Tigers, the Dallas Cowboys and the Texas Longhorns. Cruising, cooking and reading were his favorite hobbies, and he loved the memories made with his canine companions over the years. Chris was a frequent attendee of his grandsons sporting events and took great joy in watching them grow. He cherished the time spent with family and friends. The Memorial Service will be held at Craig Funeral Home in St. Augustine, Florida on Friday, March 4th at 2pm. The service will be livestreamed, and recorded, and can be viewed via the Craig Funeral Home website. Look for the link to Christopher Robb's name to join the livestream or view the recording. In lieu of flowers, Chris requests that anyone who wishes to can make a donation to the American Red Cross Disaster Relief Fund.

The family of Christopher Robb created this Life Tributes page to make it easy to share your memories.

Send flowers to the Robb family.