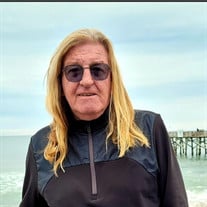 Ciaran Monaghan, 63, beloved husband, friend, brother, and local golf professional, died suddenly, following a cardiac arrest, at the Orlando airport on December 21 , 2021. He leaves behind his loving, heart-broken wife, Robin Edwards and stepsons, Derek, Shaun and Hollis and their families. He is survived by his sister Marie, brothers Alf and Damien, and their extended families in Ireland. Ciaran was deeply loved by Robin’s family; Mother-in-law Mary Hires Barbree; sisters: Martha Hires Barbree, Karen Hires Bradley, and Carla Hires Smith; and brother, Tracy Hires. Ciaran was best known locally as the highly regarded teaching professional affiliated with St. Augustine Shores Golf Club (“the Shores”), where he made many friends, and helped hundreds of causal golfers learn to have fun playing golf. Ciaran was born June 24, 1958, in the small country town of Carrick-on-Shannon, which as its name suggests, straddles the famous River Shannon, in Ireland. He is pre-deceased by his father, Desmond, and his mother, Maureen. Both were keen amateur golfers. A born mimic from the earliest age, Ciaran could copy anyone or anything - from other people’s golf swings to the foibles of animals and machinery. He had wonderful hand / eye coordination and could pick up any physical skill very quickly. From the start Ciaran was gifted with an easy, natural golf swing, which generated effortless distance - an asset that won him admiration and many golf tournaments. After graduating with the Presentation Brothers school, he joined the internationally famous John Jacobs Academy of Golf and graduated as a golf professional in the late 1970’s. He went on to qualify for and play on the European Tour. Meanwhile, back in Ireland, he served as resident professional at several renowned Irish Golf courses such as the famous Druids Glen - venue for the Irish Open Golf Championship. As his career took-off, he became well-known for his TV series, ‘Living With Your Golfing Faults,’ which encouraged many newcomers to take up the game and at the same time helped struggling players get more joy out of their own game. While playing and teaching golf, he also became an established commentator on the Irish television network (RTE), where he covered the major Irish golf events, such as the Irish Open. Ciaran is also credited with giving Gillian Burrell her first job as an assistant teaching pro in 1991. Burrell was appointed as the first woman to head the Irish PGA in 2018. In 2002, Ciaran moved to the US, first to Miami, where he ran a golf school and played on the U.S. Hooters golf tour. In 2004, he moved to St. Augustine and began a successful affiliation with the Shores. As a teaching professional, Ciaran’s gift for connecting with people, his international experience, his natural ability, and easy approach to the game, proved infectious to generations of golfers. Wherever he went, he easily developed a wide community of loyal patrons for the game. It was in St. Augustine too that he met the “love of his life,” Robin Edwards. They were true soul mates from the start and were married at the Shores ten years ago. Indeed, Robin’s whole family embraced Ciaran and considered him “one of us.” Ciaran always had a big heart and a breezy personality. He was a people’s person - charming, unselfish, caring and saw the fun in everything. His sudden death has shocked the community. A Memorial Mass will be offered for his repose, on Saturday, January 29, 2022, at 9:00 am in Corpus Christi Church, 6175 Datil Pepper Road, St. Augustine, Fl 32086. All are welcome to attend. On Sunday January 30, at 6:15 pm, a Celebration of Life Service, will take place, at the Shores (707 Shores Blvd, St. Augustine), with a reception immediately afterwards. All are welcome to attend. In lieu of flowers, please consider donations to Ciaran’s grieving wife Robin Edwards, to help offset funeral expenditures. Donations can be made payable to Robin Edwards in care of Craig Funeral Home, 1475 Old Dixie Hwy, St. Augustine, or dropped off at the Shore Golf Club.

The family of Ciaran Monaghan created this Life Tributes page to make it easy to share your memories.