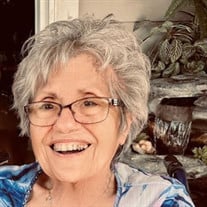 Beloved Mother, Grandma, and Great Grandma, Corrine Ann Kliszak, 82, of St. Augustine, FL., died on Saturday, October 30, 2021, at Silver Creek Assisted Living in St. Augustine, FL. She was born August 26, 1939 in Buffalo, NY to George and Cecilia Szabla (deceased). She married Leo Kliszak (deceased) on August 24, 1957. She is survived by her daughter Karen (Michael) Cox of St. of Augustine, FL and son James (Karen) of Atlanta, GA; eight grandchildren: Steven (Kristina), Shannon (John), Jessica, Makenzie (Devon), Ciara, Alexandra, and Joseph; and 4 great grandchildren (Grace, Rowan, Lily and Kai); one sister, Diane Jaramillo, and many cousins. Her husband and one son, Alan, preceded her in death. Corrine lived most of her life in Buffalo, NY. She graduated from East High School and married Leo Kliszak on August 24, 1957. In addition to being a wife and mother to their three children, Corrine was a beautician and worked in a bridal shop for many years. She loved her family and friends and despite the difficulty of leaving lifelong friends, she moved to St. Augustine to be closer to her surviving children. She lived in and was active in her community at Coquina Crossing, joining the Red Hat Club and Mad Hatters (knitting baby bonnets for local hospitals). In 2018, she moved into the Silver Creek Assisted Living community where she was described as the “social butterfly”. Which was true for all of her life. She was much loved and will be greatly missed. Services and visitation will take place in Buffalo, NY. Interment will take place at Clarence Fillmore Cemetery where she will be reunited with Leo and Alan.

The family of Corrine Ann Kliszak created this Life Tributes page to make it easy to share your memories.

Send flowers to the Kliszak family.