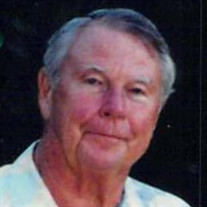 Curtis Allen Peele (“Allen”) passed peacefully at Flagler Hospital in St. Augustine, Florida on Tuesday, March 17, 2020. He was born on November 29, 1932 in St. Augustine and joined the Army where he later served in the Korean War. Following the war, he attended the University of Florida and began his career as a banker in Miami, Florida later moving to St. Petersburg, Florida where he married, had a family and pursued a successful career as a real estate developer. Allen possessed a strong entrepreneurial spirit that served him well during many real estate projects throughout the state of Florida, North Carolina and the Bahamas (specifically San Salvador). He was an adventurer that loved flying, boating, scuba diving and traveling the world and seas, which he captured in his own poetry. He also took great pride in his alma mater and being a Florida Gator. At the end of each day, he enjoyed a good cigar and a glass of brandy on the porch. Allen was preceded in death by his brother, Raymond Peele, and his parents, Curtis D. and Eloise Peele. He is survived by two daughters, Leslie Soulek of Stuart, Florida and Ashlyn Silver of Seminole, Florida; two sons, Gary Peele of Tampa, Florida and Curtis Allen Peele II of Los Angeles, California; five grandchildren, Jacob Soulek, Astella and Avalyn Silver, Julia and Alexander Peele; and two nieces, Peggy Peele Morrow and Judy Peele Williams. A memorial service and interment will be scheduled at a later date in St. Augustine.

Curtis Allen Peele (&#8220;Allen&#8221;) passed peacefully at Flagler Hospital in St. Augustine, Florida on Tuesday, March 17, 2020. He was born on November 29, 1932 in St. Augustine and joined the Army where he later served in the Korean War.... View Obituary & Service Information

The family of Curtis Allen Peele created this Life Tributes page to make it easy to share your memories.

Send flowers to the Peele family.