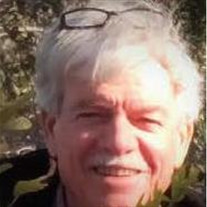 David Levering Arnold, 72, died peacefully at home in St. Augustine on January 19, 2020. Born on November 5, 1947 in Jacksonville, FL, he was raised in Mandarin by his parents Elizabeth and Horace L. Arnold along with his brothers, James and Robin. Life on the family farm was idyllic combined with frequent fishing trips with friends until he graduated from Dupont High School and enlisted in the United States Navy in 1964. After his active service, he married Therese Gradick and began their family and finished his Bachelor’s degree in Accounting at the University of North Florida. He went to work for the IRS first in High Point, NC and later in St. Augustine, FL. After five years he joyfully switched sides and began a self-employed career in tax representation and accounting; serving the working people of St. Augustine and the surrounding areas with tax preparation and entertaining strategies for avoiding or resolving conflicts with the IRS for 39 years. While never fully retiring, David divided his time between his beloved mountain home in Saluda, NC and his family home in St. Augustine. David was predeceased by his son, Matthew. He is survived by his devoted wife of 11 years, Catherine, and five remaining children who will miss him dearly: Katherine Arnold of New Orleans, LA, Amy of North Carolina, Peter Arnold (Erin) of St. Augustine, Megan Duco (Michael) of St. Augustine, and Grace Arnold of St. Augustine. He is survivedby his 8 grandchildren: Kieran Arnold, Rose Chapman, Edain Arnold, Isabella Bondzeit, Artemisa, Sayre, Timothy Arnold and Eloise Arnold. He is also survived by his two brothers, James Arnold and John Robinson Arnold, both of Jacksonville, and many wonderful nieces and nephews. A memorial celebration of David’s life and friendships will be held on Saturday, February 8, 2020 at 11:30am at the Shrine Club of St. Augustine, FL, 250 Brainard Dr., St. Augustine, 32086. A short service will be followed by a shared meal, music, and an oyster roast. All friends are welcome to join the family in celebrating David’s life.

David Levering Arnold, 72, died peacefully at home in St. Augustine on January 19, 2020. Born on November 5, 1947 in Jacksonville, FL, he was raised in Mandarin by his parents Elizabeth and Horace L. Arnold along with his brothers, James and... View Obituary & Service Information

The family of David Levering Arnold created this Life Tributes page to make it easy to share your memories.

Send flowers to the Arnold family.