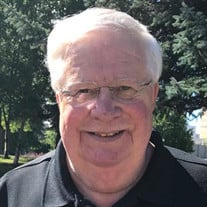 David N. Richard (Dave), 71, of Saint Augustine, Florida, passed away at home on August 14, 2020 with his loving family by his side. Dave was born on April 11, 1949 in Colchester, Vermont, son of Alfred (Freddy) Richard and Yvette (Quintin) Richard. Dave graduated from Winooski High School, Class of 1967, where he excelled in sports; graduated with an Associate’s Degree in Law Enforcement from Champlain College; and graduated with a Bachelor’s Degree in Public Administration from Trinity College. Dave also took graduate courses at the University of Vermont. From 1969 to 1973, Dave served in the U.S. Coast Guard as a military police officer. Upon separation from the Coast Guard, Dave continued his career in law enforcement working for the Winooski Police Department and the Colchester Police Department. From 1979 to 1997, Dave worked for the University of Vermont where he retired as the Chief of Police. During his tenure, he was instrumental in transitioning the department from security to a police department. While at UVM, Dave attended the FBI National Academy; was a member of the FBI National Association; and a member and past president of Northeast Colleges and Universities Security Association. After retiring from UVM, Dave and his family relocated to Florida, where he opened a successful security business, The Dave Richard Group, Inc. Dave served his community as a Select Board member for Colchester Vermont. He was also a member of American Legion Post 91 and Amvets Post 1 in Colchester. Dave leaves his wife of 31 years, Mary V. (Reil) Richard to whom he was a dedicated and loving husband. He also leaves two beloved sons, Kyle and his wife, Rhian, of Saint Johns, Florida, and two grandsons, whom he adored, Luke and Brooks; Alexander Richard and Mari Moore of Jacksonville, Florida. He also leaves two brothers, Donald Richard and Nancy Conner, of Colchester, Vermont, and R. James Richard of Naples, Florida. Dave also leaves several nieces, nephews, cousins, and many special lifelong friends. Dave was predeceased by his parents, Alfred Richard and Yvette Richard, two sisters, Ann Brunelle and Mary Margaret Richard, and sister-in-law Mary Emma Richard. A private celebration of life will be held in Saint Augustine, Florida at a later date. In Dave’s memory, donations can be made on line to the American Cancer Society at cancer.org

David N. Richard (Dave), 71, of Saint Augustine, Florida, passed away at home on August 14, 2020 with his loving family by his side. Dave was born on April 11, 1949 in Colchester, Vermont, son of Alfred (Freddy) Richard and Yvette (Quintin)... View Obituary & Service Information

The family of David N Richard created this Life Tributes page to make it easy to share your memories.

Send flowers to the Richard family.