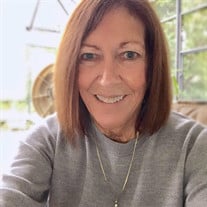 Deborah “Debi” D. Byford, 67, was born March 20, 1953 and passed away on June 2, 2020 in Community Hospice Center in St Augustine, FL. She was born in Decatur, AL, to parents the late Billy and Sara Byford, and had resided here in St. Augustine from 1957 to 1978. She worked at the Florida School for the Deaf and Blind from 1971 to 1978. She then moved several times and continued to transfer to various jobs with the State of Florida until 1985 when she and Glen moved to Atlanta. Debi was a graduate of the University of Florida with a BA in journalism and communication. While in Atlanta she began working for AstraZeneca and finished her career as a Pharmaceutical Representative retiring in 2009. At that time, she moved back to St Augustine to help care for her Dad. She is survived by her spouse Glen Knight, her Aunt Barbara Golden, Ed Austin, Deanna Miller, stepson Matt Koch, Billie Sue Ward, Adelle Byford, and her beloved Rocky! She was preceded in death by her parents, Billy and Sara Byford, and her brother Billy Joe Byford (Joe cool). A visitation will be from 12:00 p.m. – 1:00 p.m. with a funeral service beginning at 1:00 p.m. Saturday, June 6, 2020, at Craig Funeral Home with a burial to follow at Craig Memorial Park. Pallbearers will be: Russ Luker, Rusty Luker, Dennis Levesque, Dougie Detrick, Jamie Golz, and Johnathan Luker. Flowers are gratefully accepted. Anyone wishing to watch the service that was previously recorded please follow the link below: https://www.tributeslides.com/tributes/show/DN7ZPJCDL3DZWXBX Craig Funeral Home, Crematory and Memorial Park (www.craigfuneralhome.com) is in charge of arrangements.

The family of Deborah "Debi" Diann Byford created this Life Tributes page to make it easy to share your memories.

Send flowers to the Byford family.