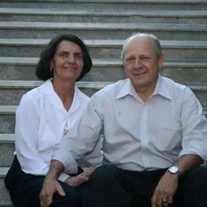 Doris Jean (Hendricks) Stevens, 70, previously of St. Augustine, FL passed away on July 26th, 2021 at home after a long illness. She was born in 1951 to the late Charles and Mary Louise (Harris) Hendricks of Staunton, VA. She moved with her family to St. Augustine, FL in 1966. She graduated from St. Augustine High School in 1969. She married Michael A. Stevens in 1971. The couple made their home and raised their three sons in St. Augustine before relocating to Palm Coast in 2011. Although she left Virginia over 50 years ago, she never lost touch with her family and friends. Her constant phone calls and social media interactions allowed her to be an active part of the Stuarts Draft community and family. Doris was known for her love of family and friends. She was immensely proud of her family and enjoyed the times spent together celebrating holidays and everyday moments. She was always ready to share advice over the ever present cup of coffee, with cream, of course. Doris was a lifelong advocate for children and was deservedly proud of her service as a volunteer Guardian ad Litem. She was recognized as a Guardian ad Litem of the year for the State of Florida in mid 1990s and also served as foster parent with Daniel Memorial. Doris is survived by her beloved husband of 50 years, Michael A. Stevens; sons Michael C. Stevens, Christopher Stevens (Anne), and Eric Stevens (Barbara); twelve grandchildren Sarah, Michelle (Stephen) Sigman, Eric Jr, Trevor, Jack, Monica, Leah, Ian, Mark, Matthew, Caitlynn, Isaac; three great-grandchildren Stephen Jr, Jax, Arlo; her siblings Jimmy (Pompey) Hendricks, Bertha (Sissy) Taylor, John (Duke) Hendricks, Kenneth (Monk) Hendricks. She is predeceased by her siblings Thomas (Bonton) Hendricks, Roger (Skeeter) Hendricks, and Betty Jane (Hendricks) Fitzgerald. Memorial Service will be 11AM Sunday at Craig Funeral Home. A commitment service will be held at a later date at Jacksonville National Cemetery.

Doris Jean (Hendricks) Stevens, 70, previously of St. Augustine, FL passed away on July 26th, 2021 at home after a long illness. She was born in 1951 to the late Charles and Mary Louise (Harris) Hendricks of Staunton, VA. She moved with her... View Obituary & Service Information

The family of Doris Jean Stevens created this Life Tributes page to make it easy to share your memories.

Send flowers to the Stevens family.