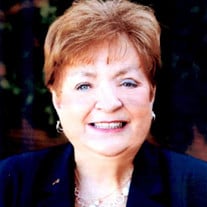 Dorothy “Dottie” Coker, passed away on Sunday, March 29, 2020 in Palm Coast, FL. Dottie was born in Salem, Ohio to the late Dewey Watts and Ada Kelley Watts. She is survived by her daughter, Barbara King (George), Palm Coast, FL; and sons, Steve King, Safety Harbor, FL, and Jeff King (Stephanie), St Augustine, FL. grandchildren, Chad King, Megan King, Cooper King, Avery King, Angie Ashbaugh and Nancy Waterhouse and four great grandchildren. She was preceded in death by one son, David King; She is survived by her sister, Virginia Haugen, Crossville TN, and predeceased by three brothers, Arnold Watts, Jack Watts and Joe Watts. Dottie graduated from Portsmouth (OH) High School and attended Ohio Wesleyan University. She was a proud sister of Kappa Kappa Gamma. Dottie and her family moved to Orlando, Florida in the late 1950s, where her husband worked with the space program. True to her outgoing nature, she quickly became involved in community and social activities. In the mid 60s, her family moved to St Petersburg, FL, where she continued her civic involvement. It was there that Dottie attended classes and earned her Real Estate License. In the mid 70s, Dottie moved to Bristol, TN. Not one to let the grass grow under her feet, she joined a women’s group the first week she was in Bristol. She also began her long and successful career in real estate with Wayne Deere Realty. She worked with The Brown Agency and Heritage Homes, later becoming owner/broker of that company. When she sold Heritage homes, she worked with Realty Executives Bristol until she moved to Florida in 2017. Throughout her real estate career, Dottie served the profession in many capacities. She served as President of the Bristol Association of Realtors; President, Secretary and member of, Board of Directors of Northeast Tennessee Association of Realtors. Dottie served on many committees for both associations through the years. She was recognized for her achievements and received the Realtor of the Year in 1997 and 2008, and in 2016 was inducted into the Hall of Fame. She was a charter member of MLS (Multiple Listing Service) and served on its Board of Directors. She served as a director for the Tennessee Association of Realtors and the National Association of Realtors. Dottie was a proud member of the Bristol Rotary Club. She worked tirelessly to support numerous organizations which included Meals on Wheels, Second Harvest Food Bank, Boys and Girls Club, Habitat for Humanity, Holston Children’s Home, YWCA and United Way. She was a faithful member and Deacon of First Baptist Church, Bristol, TN. Dottie never met a stranger. She loved to host parties for her friends and family. And, wherever she was having fun, you would see her dancing the night away... A memorial service will be held at a later date in Bristol, Tennessee. In lieu of flowers please make a donation to the Rotary Club of Bristol, using GoFundMe, link provided. http://gf.me/u/xt9i3i

The family of Dorothy K. Coker created this Life Tributes page to make it easy to share your memories.

Send flowers to the Coker family.