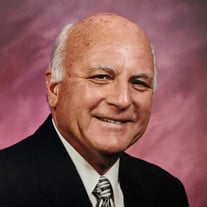 It is with great sadness that we announce the passing of our father Douglas Dressel Shull, age 87. Born October 1st, 1932 in Holgate, Ohio to Gladys Rose Dressel Shull & Carleton Shull growing up in Milford & Garrett, Indiana. Doug earned his Eagle Scout badge in 1949 & graduated from Garrett High School in 1950. Graduate of Indiana University with a degree in Journalism in 1955. Douglas was a 1st Lieutenant in the Army Infantry, 1st Army Division. A lifetime broadcaster starting at WANE television and WOWO radio in Fort Wayne & former General Manager of WRMF and WJNO radio stations in West Palm Beach, past owner of St. Augustine’s 1st coast radio stations WFOY-AM, WUVU-FM and WAOC-AM. Devout Member of Anastasia Baptist Church for over 35 years, Active member and past president of St. Augustine Rotary, Board of Directors North Florida Council Boy Scouts of America, Presidents Society of Flagler College, Past Board of Directors United Way and St. Augustine Sports Club. Doug is survived by his three sons, seven grandchildren and two great-grandchildren. The sons are Lt. Col. Douglas Dunifon Shull, USAF (Ret.) his wife Rosa Reich and children, Melody and US Army Specialist & Engineer Kyle Shull, from Melbourne, Florida; David Dunifon Shull, Palm Coast broadcaster, his wife Nancy and his daughter Jillian, from Palm Coast, Florida; and Darren Dunifon Shull, Esq., his wife Sandra and children Marcela, Daniel, Damian and Olivia Mae from Tequesta, Florida. His brother-in-law, Jay Stuart, will sing the Lord’s prayer. Doug is pre-deceased by his parents, his sister Sharlie Stuart and his wife Marilyn of 57 years. Doug was a devoted husband, a loving father and a great friend to many, he will be deeply missed as he joins the love of his life, Marilyn, for the rest of eternity. Funeral services will be at Anastasia Baptist Church in St. Augustine on Friday, December 6th, 2019. Visitation begins at 2 p.m., the funeral service at 3 p.m. followed by a reception with hors d'oeuvres. In lieu of flowers, the family respectfully requests contributions to the Anastasia Baptist Church.

It is with great sadness that we announce the passing of our father Douglas Dressel Shull, age 87. Born October 1st, 1932 in Holgate, Ohio to Gladys Rose Dressel Shull & Carleton Shull growing up in Milford & Garrett, Indiana. Doug earned his... View Obituary & Service Information

The family of Douglas Dressel Shull created this Life Tributes page to make it easy to share your memories.

It is with great sadness that we announce the passing of our...

Send flowers to the Shull family.