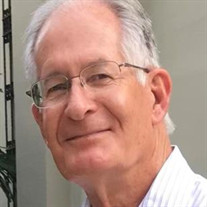 Kenneth “Doyle” Griffin, 71, passed away suddenly on Friday, October 22, 2021. Doyle was born September 29, 1950, in Palatka, Florida, to his late parents, Kenny and Peggy Griffin. He was raised in Elkton, Florida, on his family farm. He resided in Elkton until moving to St. Augustine with the love of his life Mary, his wife of 37 years. In his younger years he enjoyed surfing and playing guitar. After graduating from Hastings High School, he attended and degreed in accounting from Jacksonville State University in Jacksonville, Alabama. Doyle returned home and continued farming for many years before expanding his career into contracting, including having his own framing business. His knowledge and accomplishments in the field led to a position with the St. John’s County Building Department in 1999 as a Building Inspector. He later acquired his license as a Plans Examiner and served in that capacity until 2017 when he retired for the first time. In 2019 Doyle returned to the Building Department and resumed his role as a Plans Examiner until retiring for a second time in 2021. Although Doyle had a career he enjoyed, his true love was his family and his many hobbies. He was an avid naturalist, including bird watching, drawing, landscaping and kayaking with Mary. His pencil drawings were stunning and life-like. His love for nature also pulled him to woodworking. He carved beautiful duck calls, bowls, and tables, frequently giving his pieces as gifts to those dear to him. He also loved to raise and ride horses, and he shared this love with his wife, children, and grandchildren. He loved reading and was known to write romantic letters to his loving and surviving wife, Mary Griffin (Thomas). He was a strong and incredibly hardworking man. His family and friends that are left behind will miss him with all of their hearts and he will never be forgotten. Doyle is also survived by 1 son Matthew Griffin (Sandy) and 5 daughters: Gina Griffin, Michelle Manucy (Brad), Jessica Peel (Daniel), Sheila Lopez (Dan), and Ashley Flaschen (Howard), along with 15 grandchildren, and 3 sisters: Debbie Doan (Dan), Dana Griffin, and Deidra Thornton (Dean), along with many nieces, nephews and a large extended family. A visitation will be held 10-11 AM Friday at Craig Funeral Home. The funeral service will begin after the visitation at 11AM on Friday at Craig Funeral Home. In lieu of flowers, those wishing to make a contribution in memory of Doyle may make them to the American Heart Association, https://www.heart.org/en/get-involved/ways-to-give or to Ducks Unlimited, https://www.ducks.org/support/donateOnlineSecure.aspx?promoKey=MemorialHonorGiving&ID=4889

The family of Doyle Griffin created this Life Tributes page to make it easy to share your memories.

Send flowers to the Griffin family.