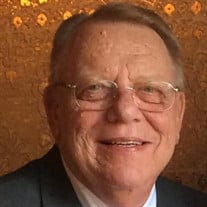 Edward Henry Jones, Jr. passed away in the early morning on 12/16/21 while in hospice. He was 73. He is survived by his wife Dottie, his son Chris and his family (wife Crissy and son Nathan), daughter Courtney, sister Betty, and brother Gary. His older sister Cass passed away in 1998. He was preceded by his first wife Coni who passed away in 2014. Ed is also survived by Coni’s mother Eva, sister Pat, and brother Robert who remained close members of the family. Eddie, as he was known by his siblings, was born in Baltimore, MD in 1948. He grew up in a yellow house with his parents and three siblings until his father passed away unexpectedly at age 52. He then took on a menagerie of jobs to help support his family while still in high school. Before graduating high school he met Coni whom he would be married to for over 40 years. After high school and some college at the University of Maryland Baltimore County he took a series of executive positions at supermarket chains, culminating in his position as an Executive Director with Food Lion. With his son Chris (b. 1979) and then daughter Courtney (b. 1982) they lived in Salisbury, NC and then Orange Park, FL in 1991. Ed moved on from Food Lion in the mid-1990’s and later owned and operated several fast food restaurants and worked as a paralegal. During all this time he enjoyed living in Florida, playing golf and listening to Jimmy Buffett as often as he could. His beloved wife, Coni, passed away in April 2014. In 2015, Ed met and married Dottie. Both now retired, they enjoyed driving on St. Augustine Beach and riding on Ed’s Harley. As the years went on various health issues forced him to become less active but he continued to push to participate in life as best he could. He was a loving and affectionate husband to Dottie through the 6 years they had together. Ed was a beloved husband, father, grandfather, and friend, who will be dearly missed by all who knew him. A service for Ed will be held at Our Lady of Good Counsel Church on Saturday, January 22nd, 2022 at 11am at the church. Church will open at 10am. In lieu of flowers, friends are welcomed to make a donation in Ed’s name to K9s For Warriors - Service Dogs for Disabled Veterans

Edward Henry Jones, Jr. passed away in the early morning on 12/16/21 while in hospice. He was 73. He is survived by his wife Dottie, his son Chris and his family (wife Crissy and son Nathan), daughter Courtney, sister Betty, and brother Gary.... View Obituary & Service Information

The family of Edward Henry Jones Jr. created this Life Tributes page to make it easy to share your memories.