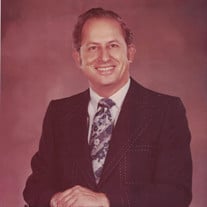 Edward (Eddy) G. Mussallem, St. Augustine businessman, civic leader and former Mayor of St. Augustine, Eddy Mussallem passed away peacefully surrounded by his family at the age of 97. A lifelong resident of St. Augustine he was born to Lebanese immigrants, Abraham and Olga Mussallem in 1924. Eddy graduated from St. Joseph Academy in 1942 and attended the University of Florida. He enlisted in the US Navy in 1943. The Navy sent him to numerous colleges including the University of Georgia, Mercer and Cornell. He served as a Lt. Commander on a Navy destroyer during World War II. He began his business career with the restaurant he founded, Eddy's Restaurant in Jacksonville, FL where he met and married the love of his life, Harriet. They were married over 60 years. In 1953 they came back home to St. Augustine where he built one of the first hotels on US 1, the Caravan Motel which later became the Quality Inn. Later he added and operated Eddy's Caravan Restaurant. He also served as past president of the Florida Quality Inn International Operators Council as well as numerous Quality Inn regional advisory boards. He was chairman for the Small Business Administration for the State of Florida having been appointed by then President Lyndon Johnson. With Chris Way he opened Barnacle Bills Restaurant in 1981. He was also owner of the Villa Zorayda Museum which has been in his family for over 108 years and was instrumental in its restoration from 2000 to 2008. His civic duties included serving as Mayor of St. Augustine from 1976 to 1980, past president of the Chamber of Commerce, past member of the Committee of 100 and Tourist Development Council. He was active in the St. Augustine Rotary Club for 57 years. Past chairman of the board of Lightner Museum for over 40 years and on the Port Authority for over 26 years. He was a longtime supporter of St. Joseph Academy serving on the school's advisory board. In 1976, while Mayor of St. Augustine he and his wife, Harriet were invited to a State Dinner held at the White House hosted by then President Gerald Ford. The dinner was held in honor of Spain's King Carlos and Queen Sofia. He was honored and humbled to represent his beloved City at such a prestigious event. Eddy was dedicated to the preservation of St. Augustine with his personal restorations of the Villa Zorayda Museum circa 1883, The Xavier Lopez House circa 1903 and the Historic Solla Carcaba Building circa 1909 which was recently sold. An avid fisherman and boater he was instrumental in reviving and continuing the annual Blessing of the Fleet for 40 years. He was a past member of the Northeast Florida Marlin Association and past president of the Ancient City Game Fish Association. He was preceded in death by his parents, Abraham and Olga, wife Harriet, daughter Karen Mussallem Coggins and brother, Wallace Mussallem He is survived by his daughter, Marcia Mussallem Byles (James), Grandchildren, Eddy Byles, Dr. Marisa Byles, Olivia Byles McKay (Matthew), Dr. Brian Coggins, Paul Coggins (Chelsea), son-in-law Lester Coggins, great grandchildren, Brady Byles, Madison Byles, Benjamin Byles, Adelyn McKay, Lillian McKay, Audrey Coggins and Asher Coggins. Visitation will take place from 5-7 pm Thursday, November 18 at Craig Funeral Home with prayers being said at 6 pm. The funeral Mass will be at 9 am Friday, November 19 at the Cathedral Basilica with the Rev. Thomas Willis, Celebrant. Flowers are gratefully declined and donations in Mr. Mussallem's memory may be made to the Sisters of St. Joseph, P.O. Box 3506, St. Augustine, FL 32085, St. Joseph Academy, 155 State Road 207, St. Augustine, Fl 32084 or to Community Hospice, 4266 Sunbeam Road, Jacksonville, FL 32257. Craig Funeral Home, Crematory and Memorial Park (www.craigfuneralhome.com) is in charge of arrangements.

Edward (Eddy) G. Mussallem, St. Augustine businessman, civic leader and former Mayor of St. Augustine, Eddy Mussallem passed away peacefully surrounded by his family at the age of 97. A lifelong resident of St. Augustine he was born to Lebanese... View Obituary & Service Information

The family of Edward Eddy Mussallem created this Life Tributes page to make it easy to share your memories.

Send flowers to the Mussallem family.