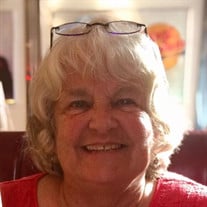 Ellen Marie Voguit, 71, of St Augustine, FL, entered the Kingdom of Heaven when she passed away peacefully at home on July 1, 2020. She was born to parents Donald Stewart and Grace Orlando, on February 18, 1949, in Reading, Pennsylvania. Ellen graduated from Wilson High School in 1967. Ellen met Steve Voguit while working at a local department store in June of 1968. They were married on August 16, 1969, and settled in Wernersville, Pennsylvania, where they raised 3 children: Tracey (Pollackov), Melinda (Clark), and Steven. While lovingly raising her three kids with Steve, Ellen also worked for the Wilson School District for 14 years, first as an elementary school secretary and then as an administrative assistant to the Director of Early Childhood Education. In June of 1999, Ellen and Steve left Wernersville and moved to Saint Augustine, Florida, to start a new adventure together. While living in Saint Augustine, Ellen had several jobs over the years, including administrative assistant at Flagler College, where she worked for 6 years. Ellen was a sweet, kind, beautiful soul who never had an unkind word to say about anyone. She was a devoted and loving wife and mother and an absolutely adoring grandmother to her 5 grandchildren. She enjoyed spending time with her family and friends more than anything else. Ellen was also an accomplished quilter and member of her local garden club and enjoyed sharing these activities with the many friends she met throughout the years. The family has entrusted Craig Funeral Home with the arrangements. A Memorial Service is scheduled for Monday, July 13, at 10:00 am at Craig Funeral Home. Due to Covid-19 restrictions, guests will be limited to 50, but the service will also be live-streamed and recorded via Facebook live for those unable to attend in person.

Ellen Marie Voguit, 71, of St Augustine, FL, entered the Kingdom of Heaven when she passed away peacefully at home on July 1, 2020. She was born to parents Donald Stewart and Grace Orlando, on February 18, 1949, in Reading, Pennsylvania. Ellen... View Obituary & Service Information

The family of Ellen Marie Voguit created this Life Tributes page to make it easy to share your memories.

Send flowers to the Voguit family.