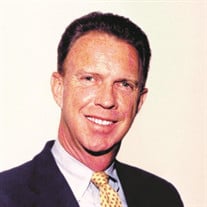 Elvin P. Yarbrough, Jr., 82, of St. Augustine passed away on July 28, 2021, several days after falling and suffering a head trauma. After treatment at UF Shands Trauma Center, he was able to return home with the help of Haven Hospice and passed away surrounded by his loving family. Elvin a devoted husband, father, and grandfather is survived by his wife of 59 years, Kelley Yarbrough; his son, Elvin P. “Buddy” Yarbrough, III; his grandsons, Elvin Pearce Yarbrough, IV and Hudson Yarbrough; his sister, Lasa Joiner; his brother-in-law, Phillip Gandy, Jr., and many nieces, nephews, and relatives. Elvin was preceded in death by his parents, his brother, Carl, and sister, Zelma Yarbrough. He began his lifetime career in the automobile industry with his father in Macon, Georgia. After moving to St. Augustine in 1974, Elvin owned and managed Yarbrough Cadillac, Nissan, and Oldsmobile. In later years, he was joined by his son, Buddy, who alongside his dedicated employees would operate the business until it was sold. His customers were always very special to him. The game of golf was one of Elvin’s greatest passions. His golf career started at an early age winning his first tournaments as a Junior Golfer in Macon, Georgia. Some of his greatest moments included winning many amateur golf tournaments and scoring a hole-in-one on 17th Hole at the stadium course at TPC Sawgrass of which he was also a founding member. A celebration of life service will be held at a later date. The family asks that in lieu of flowers, donations can be made to a charity of choice, Alpha-Omega Miracle Home (www.aomh.org), NAMI of St. Johns County (www.nami.organizationstjohnscounty.org), and The St. Augustine Humane Society (: http://www.staughumane.org). The family would like to extend their sincerest gratitude to the physicians and nurses at UF Shands Trauma Center, Haven Hospice, and Craig Funeral Home during this very difficult time.

Elvin P. Yarbrough, Jr., 82, of St. Augustine passed away on July 28, 2021, several days after falling and suffering a head trauma. After treatment at UF Shands Trauma Center, he was able to return home with the help of Haven Hospice and passed... View Obituary & Service Information

The family of Elvin P. Yarbrough Jr. created this Life Tributes page to make it easy to share your memories.

Send flowers to the Yarbrough family.