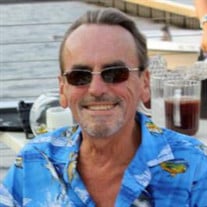 Eric Malcolm Burgess 1-26-1950 - 5-11-2022 Eric Malcolm Burgess, age 72, passed away on May 11, 2022, after a long illness. Eric was born in Norwalk, Connecticut to Virginia “Jinny” Doris Rogers Burgess and Earl “Mal” Malcolm Burgess. He spent his youth growing up in Westport, Connecticut, and was a graduate of Staples High School. Eric attended Windham College in Vermont to study mathematics but during homecoming in October 1969, he met musician Buddy Miles at a concert, and four days later he became the road manager for The Buddy Miles Express. Shortly after, Buddy Miles met up with Jimmy Hendrix and Billy Cox, and the Band of Gypsies was formed. Eric traveled with the Band of Gypsies as a roadie through January 1, 1970, and the famous Filmore East concert. Eric returned to Westport in 1970 and using his prior experience in the music industry, became a manager at the Player’s Tavern, a local establishment where iconic blues and rock bands played such as Muddy Waters, James Cotton, the Ramones, James Montgomery, Pat Metheny, and the Dirty Angels. In the early 1980’s, Eric met the love of his life, Laura Spirito, in Darien, Connecticut and they were soon married. Daughter Ashley Morgan was born a year later and the family resided in Norwalk, Connecticut where Eric managed restaurants in Darien and South Norwalk. The family moved to New Hampshire in the mid-80s to be closer to his siblings, and their families, and his parents and Eric began a new career in construction, cabinet, and furniture making to high high-end window and door design. In the late aughts, Eric joined Laura at her public relations company to manage finances and operations. They lived on the New Hampshire seacoast until 2010, when Eric and Laura decided to moved to New Bern, North Carolina after Ashley’s college graduation and joined Laura at her public relations company to manage finances and operations. In 2015, a diagnosis of cancer, made Eric decide to retire and enjoy his family, friends, and his beloved boat. In 2020, Eric and Laura picked up and moved to Saint Augustine, Florida to be near his daughter, son -in-law, and grandchildren. Throughout his life, Eric loved music from his generation and loved to play his Fender guitar. He was extremely inquisitive and enjoyed reading everything from physics to ancient military history. He loved to be on the ocean and fish, and together with his wife, enjoyed several years of big game fishing. Considered by many in his family and his friends to be a loyal, wise, and humble man, Eric will be greatly missed by all. Eric is predeceased by his parents, and his sisters, Nancy Burgess Anderson and Cyinthia “Cinny” Burgess Gagneux. He is survived by his wife, Laura Burgess, his daughter Ashley Burgess Gall, son -in-law Mike Gall, and two granddaughters, Zoey Madison and Leilani Burgess Gall, and extended family members both young and old.. The family will be holding a private celebration of a life well lived with details to be announced shortly. .

The family of Eric Malcolm Burgess created this Life Tributes page to make it easy to share your memories.

Send flowers to the Burgess family.