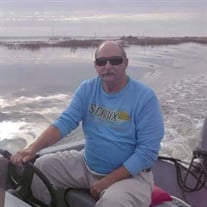 Eugene Bray Loveland, Jr. of St. Augustine, FL passed away on Saturday, January 30, 2021 from complications with COVID-19. Gene was just shy of his 72nd birthday and was surrounded by his wife and children when he left this earth. Gene was born February 23, 1949 in St. Augustine to Eugene Bray Loveland, Sr. and Betty Ann Andreu. He was the older brother to his sister Maranne (Sissy) Loveland whom he always looked after, especially after the loss of their father as young teenagers. His family owned two houses on King Street, in the heart of St. Augustine, and rented rooms to boarders passing through. From a very young age he learned to work hard, tending to chores at the boarding house and helping his mother and grandmother. He was always interested in sports and enjoyed baseball, basketball, tennis, surfing and especially fishing. Gene met his wife, Christine and they were married on November 20, 1976 and later sealed in the Washington, D.C. Temple of The Church of Jesus Christ of Latter-Day Saints, for time and all eternity. They welcomed four children and raised them in the historical family home in St. Augustine. Gene was a hard worker and often held multiple jobs to make sure his family was supported. He most notably worked at Marine Supply and Oil Company for more than 25 years, where he enjoyed honing his skills for boating and fishing. He loved working in an atmosphere that enabled him to visit with other people and talk with them. He was known for his deep, friendly voice and hardy laugh. He truly never met a stranger and would strike up a conversation wherever he was. When it came to his children, they never had to doubt his love for them. Even if he had to be tough, he would take the time to stop and let them know how much he loved them and how proud he was of each of them. Along with being a devoted husband and father, he was a faithful member of his church. He served in many capacities and most remembered as the youth basketball coach and a “Home Teacher,” where he would visit with church families, teach a lesson and serve the family in their times of need. He was always devoted to serving others and being genuinely concerned with the needs of those around him. Gene was a very good friend. He spent a lot of time out on the water fishing and loved to take his friends and family out on his boat. Toward his later years, especially, fishing was a daily routine for him as the weather permitted. It's where he loved to be and he found peace and refuge. After the untimely death of his wife Christine in 2014, Gene, having a big heart, found love again with Gayle Maltby. He and Gayle married and have been loving companions to one another these last six years. Gene is survived by his dear wife, Gayle Maltby Loveland, four children, Ian (Heather) Loveland, Emily (Christopher) Ellis, Jairus Loveland and Natalie (Matthew) Booth, and eight grandchildren, Dylan & Olivia Loveland, Zara, Chloe, Samuel & Ethan Ellis, and James & Hailey Booth. He is also survived by his sister, Maranne (Sissy) Loveland and her four children and their families. Funeral arrangements are being made through Craig Funeral Home. All of those who wish to pay their respects may do so at the graveside Memorial Service on Thursday, February 4, 2021 at 11:00 a.m. at Craig Memorial Park 2600 Old Moultrie Rd St. Augustine, FL 32086.

Eugene Bray Loveland, Jr. of St. Augustine, FL passed away on Saturday, January 30, 2021 from complications with COVID-19. Gene was just shy of his 72nd birthday and was surrounded by his wife and children when he left this earth. Gene was... View Obituary & Service Information

The family of Eugene Loveland created this Life Tributes page to make it easy to share your memories.

Send flowers to the Loveland family.