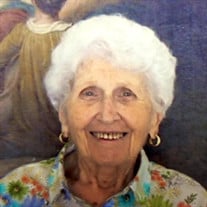 Eva Markham Shelley passed away peacefully and surrounded by family, at her home on October 20, 2019. She was born in Sturgis, KY on December 10, 1920 to John and Effie Markham. She was a nurse, graduating from Deaconess Hospital School of Nursing. Evansville, IN in 1942. When an appeal for nurses was made, she joined the US Army Corp and was attached to the 108th Evacuation Hospital for 32 months. She spent sixteen months in the European theater, earning three battle stars and becoming a 1st Lieutenant. Since she had been in surgery, she was deployed to a surgical group and while waiting deployment to the South Pacific, she was sent on Rest & Recreation to Cannes, France. There she met Dr. Joseph Shelley from the 29th Division and they were married a year later in Evansville, IN. She was a member of the Ancient City Baptist Church, Women’s Missionary Union, Junior Service League, St. Johns County Women’s Medical Society, Flagler Hospital Auxiliary, St. Augustine General Hospital Auxiliary and a volunteer member of the Blood Bank of St. Johns County. Dr. Joseph Shelley and Stephen A Shelley preceded her in death. She is survived by Mark Shelley (Christine), Patricia S. Walters (Bruce), David Shelley (Leslie), Katherine S. Chenowith (Lon), eleven grandchildren: Tara Shelley, Stephen Shelley (Jenny), Shelley Walters, Joe Shelley (Allyson), Katie Shelley (Ty), Mary Shelley, Malachi Chenowith (Chrystal), Nathanael Chenowith (Anahi), Karis Chenowith, Robert Strause and Erin Strause Lambraia (Michael) and nine great-grandchildren. Visitation will be held 5:00PM - 7:00PM Friday at Craig Funeral Home. Funeral services will be held 10:00 AM Saturday at Craig Funeral Home Chapel. Burial will be private in San Lorenzo Cemetery. No flowers please. Contributions may be made to Ancient City Baptist Church or Vietnam Veterans of America.

Eva Markham Shelley passed away peacefully and surrounded by family, at her home on October 20, 2019. She was born in Sturgis, KY on December 10, 1920 to John and Effie Markham. She was a nurse, graduating from Deaconess Hospital School of... View Obituary & Service Information

The family of Eva Markham Shelley created this Life Tributes page to make it easy to share your memories.

Eva Markham Shelley passed away peacefully and surrounded by...

Send flowers to the Shelley family.