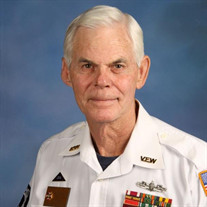 Fredrick Roger DuPont passed from this life on March, 05, 2019 at the age of 72. A native of St. Augustine, he was born September 6, 1947 to William Daniel DuPont, Jr. and Ivy Dixon DuPont. In 1964, he was a member of the St. Johns County Lifeguard Corps and was activated by the Red Cross to help evacuate people and man shelters during hurricanes Cleo and Dora. He graduated from St. Augustine High School in 1965 and enlisted in the U.S. Marine Corps in 1966, serving 18 months in Vietnam as a Combat Engineer. In 1976, on his way to enlisting in the U.S. Navy in Los Angeles, California, he detoured to Las Vegas, Nevada to marry Diane Mary Minshull McGuire. During his time in the Navy he earned an Associate’s Degree in Computer Science from Florida State College at Jacksonville, a Bachelor’s Degree in Human Resources from St. Leo University, and graduated from the U.S. Navy Senior Enlisted Academy. He served as Repair Supervisor of Radio Communications in U.S.S. Saratoga (CV-60); Director of Radar Maintenance School in Fleet Training Center, Norfolk, VA; and Senior Enlisted Advisor in U.S.S. Flatley (FFG-21). After twenty-three years of active duty in the Marine Corps and Navy, he retired as a Senior Chief Electronics Technician in 1995. He was then employed by BellSouth/AT&T as a Cable Repair Technician, fully retiring in 2008. He spent his retirement volunteering in various organizations. He was the charter president of the Family of Abraham DuPont, Inc.; Secretary of 9th Engineers USMC Reunion Association; Commodore and life member of the St. Augustine Boating Club; Exalted Ruler and life member of St. Augustine Lodge #829 of the Benevolent and Protective Order of Elks; President and charter member of Branch 25 of the Fleet Reserve Association; and Honor Guard Commander and life member of Bryan Tutten Memorial Post 2391 of the Veterans of Foreign Wars. Preceded in death by his parents and brother Michael David DuPont, he is survived by siblings William Daniel DuPont, III, James Fulton DuPont, Ralph Merlin DuPont and Judith Ann DuPont; stepson Kenneth Wayne McGuire; stepdaughter Kimberly McGuire Morgen; granddaughter Kearsten Haley Morgen; grandson Robert J. Morgen, III; many nieces and nephews; and the love of his life Diane. “God, grant me the serenity to accept the things I cannot change, courage to change the things I can, and wisdom to know the difference.” Burial will be at sea by the U.S. Navy. Farewell my friends, the sea has called me home.--

Fredrick Roger DuPont passed from this life on March, 05, 2019 at the age of 72. A native of St. Augustine, he was born September 6, 1947 to William Daniel DuPont, Jr. and Ivy Dixon DuPont. In 1964, he was a member of the St. Johns County... View Obituary & Service Information

The family of Fredrick Roger DuPont created this Life Tributes page to make it easy to share your memories.

Send flowers to the DuPont family.