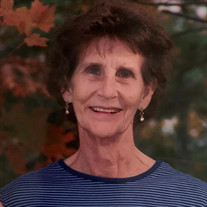 Garnett “Delores” Stevens, 83, of St. Augustine, passed away at Flagler Hospital on March 15, 2020. She was born in Newhall, West Virginia on July 26, 1936 to Mitchell Alexander Bacon and Hannah Elizabeth Altizer Bacon. In 1952, at the age of 16, Delores or “Dorsie”, as she was called by her close relatives, moved to St. Augustine with her mother, five brothers, and three sisters, whom she dearly loved. Her first job was at Setzers Grocery, where she weighed produce. She also spent a short time working at Zoric Dry Cleaners. In the late 1950’s, she married and became the mother of three. For many years following, Delores worked at the Dutch Pantry restaurant, where she was fondly known by her many customers, coworkers, and beloved friends as “Stevie”. Delores had a strong passion for the word of God and on most days, she could be found reading the bible and writing her daily prayers. She left behind many journals that over the years have been filled with fond memories, wishes, and prayers for her loved ones. She enjoyed listening to music, dancing, the ocean, gardening, and reminiscing about silly stories and happy memories. She was a devoted mother and grandmother “Nana”. Delores will be deeply missed. She knew this fragile life was a gift from God and was sure to make each moment count. Our memories of her will be treasured forever. She is preceded in passing by her sons: Johnny O. Stevens, Jr. and Jeffery A. Stevens, sisters: Louise Young, Thelma Fazio and Virginia Bacon, brothers: Harry, Jack, Tommy and Bill Bacon and grandson Brandon Corbin. Delores is survived by her daughter Melinda Ponce (Mike), sister Charlotte Kuter, brother Bobby Bacon (Barbara), grandchildren: Keisha Bunnell (Bobby), Kyle Taylor, Chad Stevens and Britanie Sykes (John), great-grandchildren: Nolan and Taylor Bunnell, Kyson and Charlee Taylor, Grayson, Caitlyn, and Claire Sykes and many loving nieces, nephews and cousins. A memorial service to honor Delores will be announced at a later date. Craig Funeral Home, Crematory and Memorial Park (www.craigfuneralhom.com) is in charge of arrangements.

The family of Garnett "Delores" Stevens created this Life Tributes page to make it easy to share your memories.

Send flowers to the Stevens family.