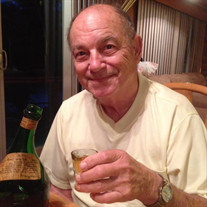 Gary Frank Rebel, 86, of St. Augustine, Florida died peacefully the morning of April 2, 2021. Born March 26, 1935 in Wyandotte Michigan to Frank and Helena Rebel, Gary was younger brother to Thomas Rebel, and older brother to Bruce Rebel. After graduating from Castle Heights Military Academy, Gary joined the Army. Thanks to the GI Bill, Gary was the first male Rebel to go to college. He graduated from Michigan State University and went to work as an insurance adjuster. During this time, he met the love of his life, Carol. After marrying, they moved to Michigan, where Rebel worked as an executive for Ford Tractor, retiring at the ripe old age of 55. During that time, he was also building a cabin for his “Dreams End” on property on Big Bradford Lake in Waters, Michigan that he and Carol owned for over 40 years. Gary and Carol were happiest at the cabin, especially when family, kids, and grandkids visited. Gary loved to be on the lake, catching minnows and attempting to catch fish that invariably eluded him. Perch was a family favorite, and Carol knew how to fry them up when Gary was successful catching them. He loved pulling his grandkids around on the trailer attached to his lawn tractor or gathering the family on to the pontoon boat for a boat ride, trip to the tree for swimming, fishing (of course) or eagle watching. There were many evenings at the fire pit, with s’mores and the occasional rusty nail. Then, there was golf. Gary golfed daily at the Natural, and as a grandkid, if you got up early enough, you could go with him and drive the golf cart. He got a hole in one there at least twice and loved the “Quarter hole” so much he wanted some of his ashes put there. Gary and Carol spent their final years in the Florida sun in St. Augustine at Silver Treasures. Carol preceded Gary in death in 2017. Gary is the loving father of Bonnie (Greg-favorite son-in-law) Jordan, Connie (Frank-favorite son-in-law) Borovsky and Corbyn Rebel. He is the proud and loving grandfather of Corey Jordan, Mary Jordan, Alexander Borovsky, Nicholas Borovsky, and Cody Borovsky. Uncle to Brian and Renee Rebel, and “Rebel” to the Up North Family (the Herchers and Learys) on Big Bradford Lake. The celebration of life for Gary will be private. Thank you to Jana Meyering, Theresa Killion and the staff at Silver Treasures for being Gary’s family during the pandemic, when his family could not be there. Thank you to Community Hospice and the Bailey Family Center for Caring at Flagler Hospital for assisting with Gary’s graceful exit. Donations can be made to help them support others on Gary’s behalf at https://www.communityhospice.com/give/ Gary will be remembered for his humming while eating, while working, while thinking. He enjoyed puttering around the cabin, and always had time for a boat ride. Rebel was a Detroit Lions fan and loved to argue with Bonnie about how bad they were. In addition, he loved the Tigers and Red Wings. He loved dogs, none more than Sadie, who he used to put a leash on and walk her while driving his Grand Marquis…slowly. When asked how he was doing, he would respond “Just short of fantastic!” And, almost daily at the cabin, he would look out the window, or out from the front porch and say “God, what a view!” Rebel had the use of duct tape down to an art form. He loved all of his grandkids and was constantly telling everyone how proud he was of their accomplishments. Eternally optimistic, he will be missed In his own words… ” It’s been a great life.”

The family of Gary Frank Rebel created this Life Tributes page to make it easy to share your memories.

Send flowers to the Rebel family.