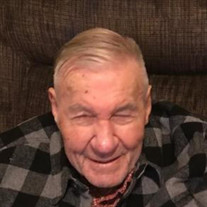 Gene Aaron Sikes, 93, of St Augustine, passed away April 19, 2021. Gene was born in Opp, Alabama, on May 11, 1927, to Harvey and Macy Sikes. He was the eldest, and lived the longest of their seven (7) children. Gene was raised on a farm in Gaskin, FL, where he picked cotton and raised hogs. He only attended school through the 5th grade. Gene came to St Augustine in the early 1950’s, where he met and married the love of his life, Marguerite “Marge” Allen, who already had four children. Gene first worked for the local Jail, using his own Bloodhound to capture escaped prisoners. Later, he took a job mowing the roadways for the State of Florida’s Department of Transportation. Thirty-eight years later, he retired from DOT as a Master Electrician. Gene was pre-deceased by his wife, Marge, and daughter, Jean Sikes Jordan. He is survived by a son, Aaron Harvey Sikes (Cindy). Grandchildren: Aaron Sikes, Jr; Ashley Sikes; Amy Jordan; Amanda Jordan; Jamie Jordan; Terry Letterman (Jerry); Margie Stokes; Janie Jones (Randy Harris); 9 great-grandchildren; and 4 great-grandchildren. Services will be at Craig Funeral Home, on Monday, April 26, 2021. Friends and family will be received from 9:00 – 10:00 a.m., followed by a service with Pastor Clarence Blalock officiating. Burial will be at Memorial Park Cemetery.

The family of Gene Aaron Sikes created this Life Tributes page to make it easy to share your memories.

Send flowers to the Sikes family.