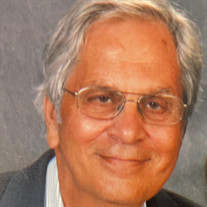 George F. Bennis of St. Augustine, Florida (formerly of Flint, Michigan) passed away peacefully on November 14th at the age of 82. George was born August 15, 1938 in Tallahassee, Florida. He attended elementary school in Albany, Georgia from the time he was 5, and he later relocated to St. Augustine, working for Marine Supply and Oil Company. In November of 1965 George accepted a job in Detroit with Commercial Wire Rope and Sling Company (now Commercial Group Lifting Products) where he was employed for 44 years, retiring as Executive Vice President. After retirement, George had to stay busy, so he worked as a consultant with Mazella Lifting Technologies in Cleveland, and later with Southeast Rigging in Jacksonville. He retired permanently in 2016. George married the love of his life, Carolyn Scoggins, in December 1957 in St. Augustine. He always referred to this true lady as his bride, wife, love and friend. He always felt he got the best of this arrangement. He was a nine year member of the Florida National Guard “Battery B” from 1956 – 1965. He was honorably discharged as a staff Sergeant. “Battery B” was very special, he often said. He received the Honorary Alumni award from Central Michigan University in 1983, and was a member of the CMU Athletic Board of Directors. He is a past president of the CMU Club of Greater Flint. He served as a member of the Board of Directors of the Flint Community Players, is a member of Sigma Alpha Epsilon Fraternity, and is a Shriner. He is a member of Toastmaster's International and Tale Tellers of Saint Augustine. He enjoyed acting and did numerous shows with Buckham Alley Theatre, the Flint Community Players, and Vertigo Productions. He had the privilege of sharing the stage with his daughter Sue Ann and his wife Carolyn on a few occasions. He also enjoyed performing in many murder mystery dinner theatre venues. He is survived by his wife, Carolyn, and four wonderful children and their spouses – Chip (Donna), Dale, David (Marcy), and Sue Ann (Joe) and seven wonderful grandchildren who all call him Papoo. They are Brittany, Tyler, Paige, Jessica, Ben, Joseph and Carolyn (Dos). He loved every moment with his grandchildren and often said they light up his life. He enjoyed people and never met a stranger. He enjoyed children very much and always wanted them to be safe. He leaves behind many friends and loved ones. In lieu of flowers, please donate either to St. Judes Hospital for Children or Shriners Hospitals. George will be cremated. Due to the pandemic, a memorial service will be announced at a later date.

George F. Bennis of St. Augustine, Florida (formerly of Flint, Michigan) passed away peacefully on November 14th at the age of 82. George was born August 15, 1938 in Tallahassee, Florida. He attended elementary school in Albany, Georgia from... View Obituary & Service Information

The family of George F Bennis created this Life Tributes page to make it easy to share your memories.

Send flowers to the Bennis family.