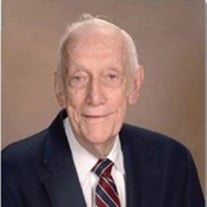 We mourn the loss of George William Hill, born November 18th, 1931. He was a devoted Husband of 51 years to Carol Clifford Hill, and a loving father to his four children: Helene, Thomas, Christopher, and George. His 13 grandchildren and 4 great grandchildren remember him as Grandpa or Grampy, and everyone else remembers him as a friend, mentor, gentleman, and trusted advisor. Whether George was opening the church, sharing a meal, or simply being George, (and sometimes Bill), he touched us all in a very special way. Born in Kansas City Missouri, George and his family lived in a few cities including Rochester, NY where both his father George and mother Frances Irene are at rest. George moved to South Florida achieving academic honors at the University of Miami where he graduated in July of 1955. He was an officer in the United Sates Airforce and was discharged in 1972 with the rank of Major. George spent most of his professional career working at Jackson Memorial Hospital Public Health Trust in Miami Florida, retiring as the Risk Administrator in 1998 after twenty-two devoted years. That same year, George and Carol relocated to St. Augustine Florida. As a St. Augustine resident, George was a regular at the local art galleries, unique gift shops and quaint restaurants. He entertained his loving family and several friends over the past quarter century. He was a very active member of Saint Anastasia Catholic Church where he attended mass and adoration frequently, opened the Church daily, was a Sacristan, Eucharistic Minister, and perhaps most importantly, shepherding faithful parishioners through their own grieving process working as a Minster of Consolation. George's time at the Church was both admired and appreciated by all he came in contact. In the end, George William Hill was a special human being to so many. Whether family or friend, each has a wonderful George story, and his presence on earth will be missed by all. Heaven has gained a most precious soul, and everyone who knew him are better as a result. A mass will be held at St. Anastasia Catholic Church on Saturday February 12th at 9am. In addition to the Mass, George will be laid to rest and join his wife Carol in the church's Columbarium following the Mass.

We mourn the loss of George William Hill, born November 18th, 1931. He was a devoted Husband of 51 years to Carol Clifford Hill, and a loving father to his four children: Helene, Thomas, Christopher, and George. His 13 grandchildren and 4 great... View Obituary & Service Information

The family of George William Hill created this Life Tributes page to make it easy to share your memories.

Send flowers to the Hill family.