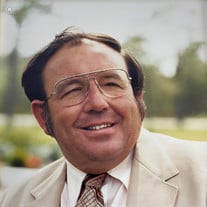 Harry H. Waldron, 82, passed away peacefully at the Bailey Family Center on Friday, March 25, 2022. He was born May 7, 1939, in South Haven, Michigan. He was a graduate of Thorton Township High School in Harvey, Illinois in 1957. He soon met the love of his life, Gwendolyn, while attending college at the University of Wisconsin, Whitewater. Gwen and Harry married July 31, 1960. They moved to St. Augustine in 1963 to raise their family, purchasing a grocery store, Harry’s Curb Mart, which they owned and operated for 63 years. Harry was elected to the St. John’s County Board of County Commissioners from 1978 to 1990, serving as the chairman 3 different times. He was an active member of the community and known by many for his smile and sense of humor. He was a 50+ year member of Ashlar Masonic Lodge #98, St. Augustine Shrine Club, Royal Order of Jesters, Elk’s Lodge, and Kiwanis Club of St. Augustine. He loved supporting the youth in his community, sponsoring a softball team for many years, coaching Gra-Y football team, and volunteering with the Special Olympics. He loved the outdoors, fishing, hunting, traveling, and was known for being the life of the party. He continued his passion of traveling, marrying his second love, Judy on November 27, 2021. They had many exciting adventures together with friends and family. He is proceeded in death by his late wife of sixty years, Gwendolyn, parents, Mary and George S. Waldron, son, George H. Waldron, and sister, Judy Paltridge. He is survived by his wife, Judy Waldron, sons, John (Shelley), Paul (Stephanie), Keith (Rhonda). Brother, Mike Waldron, grandchildren, John II (Karsyn), Tyler (Katie), Linsay (Randy), George (Stephanie), Ashley (Blake), Kati (Drew), Zoe, Koby, Josh (Michelle), Jeanette, 13 great-grandchildren and many nieces and nephews. Services will be held on Saturday, April 2, 2022, at 10am at Turning Point at Calvary. Graveside service will follow at Craig Memorial Park. The family invites everyone to the St. Augustine Shrine Club after for refreshments and the sharing of memories. In lieu of flowers, please make donations to the St. Augustine Shrine Club

Harry H. Waldron, 82, passed away peacefully at the Bailey Family Center on Friday, March 25, 2022. He was born May 7, 1939, in South Haven, Michigan. He was a graduate of Thorton Township High School in Harvey, Illinois in 1957. He soon... View Obituary & Service Information

The family of Harry H Waldron created this Life Tributes page to make it easy to share your memories.

Harry H. Waldron, 82, passed away peacefully at the Bailey Family...

Send flowers to the Waldron family.