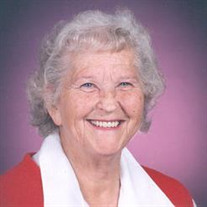 Hazel Doris Buckhalt Lewis, 98, wife of the late Francis G. Lewis and a resident of Cape Charles, VA, passed away Tuesday, June 18, 2019, at Heritage Hall Healthcare in Nassawadox, VA. A native of Dowling Park, FL, she was the daughter of the... View Obituary & Service Information

The family of Hazel Doris Bukhalt Lewis created this Life Tributes page to make it easy to share your memories.

Send flowers to the Lewis family.