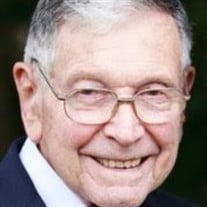 Henry B. Lange, aged 95, passed away on September 1, 2021. Henry lived a long and fulfilling life. He was a longtime resident of St. Augustine after moving from Orlando, FL where he served as President and CEO of CUES, Inc. Henry served as a SCORE mentor in Orlando and set up a local chapter in St. Augustine. For 15 years, Henry devoted his time as a volunteer instructor to local fifth graders in Marine Biology at Whitney Labs. Henry was the third and youngest son, of David Lange and Fannie Kleinert Lange who emigrated from Poland to New York, NY in the early 1900’s. Henry spent his youth as a depression era child living in the Bronx, NY. During his youth he was a passionate baseball fan of the New York Yankees as well as a skilled stickball player. In his teens, Henry played clarinet, saxophone and, piano at upstate New York hotels with his boyhood friend, the renowned Stan Getz. He enlisted in the U.S. Army during WWII and served in the U.S. Army Band at Continental Command Headquarters, Fort Monroe, Va. Following the Army, Henry attended The Ohio State University and graduated with a degree in Chemical Engineering in 1948. Henry’s career started at Merck & Co. In 1960 he founded Bench Scale Equipment Company (BENCO), the first company to downscale a chemical pilot plant to run pilot operations in a laboratory environment. Earning his master’s degree in finance from Rutgers University, Henry went on to pursue a successful career in Mergers & Acquisitions. Throughout his adult life, Henry was an outdoors enthusiast and would travel with his family to fish and hike in Maine and throughout New England and Canada. His love of the outdoors spurred his interest later in life to mountain climbing and trekking globally the Grand Tetons, Mt. Saint Elias, Mt. McKinley, Base Camp on Mt. Everest, Mt. Kilimanjaro, and K2. Henry is survived by his longtime friend, companion, and soulmate of 35 years, Charleen McKinney, his two sons, Scott, and Jeff, four grandchildren and a great grandson. A Memorial Service will be held on a future date.

Henry B. Lange, aged 95, passed away on September 1, 2021. Henry lived a long and fulfilling life. He was a longtime resident of St.... View Obituary & Service Information

The family of Henry Lange created this Life Tributes page to make it easy to share your memories.

Send flowers to the Lange family.