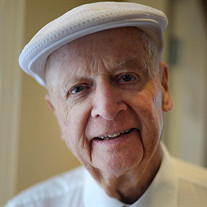 Herbert Lucas Wiles, 92, of St Augustine, FL passed away Wednesday, September 25, 2019 in Jacksonville, FL. Herbie was born May 18, 1927, at the old Flagler Hospital on Marine St in St Augustine to Bernita Lucas and G Ransom Wiles. He attended Ketterlinus High School where he was a proud cheerleader for the Fighting Mullets, and a senior lifeguard at St Augustine Beach. During the closing months of World War II, Herbie joined the Navy at age 17 and served at Pearl Harbor. On his return home, Herbie enrolled at Florida State University, which had just become coed. He majored in business and was a founding member of Phi Delta Theta fraternity on campus. He met the love of his life, Annette Folmar, on a blind date while they were both students at FSU, and they married in 1952. Herbie graduated in 1953, and his pride in FSU continued his entire life; he was an avid ‘Noles football fan! Herbie lived in St Augustine for the rest of his life except for the period of 1958-1961, when he lived in DeFuniak Springs to help his mother-in-law, Marie Douglass, manage WDSP, the radio station she owned, after the death of her husband. When he returned to St Augustine, Herbie worked at WFOY part time. He joined his father’s insurance business before founding Herbie Wiles Insurance in 1961, and moved the agency to its current location in 1966 after renovating the deteriorating house. The business quickly grew with the help of a loyal staff, and was recognized for the renovation and beautification of the houses that became Herbie Wiles Insurance. In 2006, those houses were separated and moved to the Old Jail to become its General Store and a new building was completed in 2007. Herbie was politically active in the community and a life-long Democrat. He served as a member of the St Johns County Commission for 12 years, including several as its chair. He was the first chairman and charter member of the Northeast Florida Regional Planning Council. Among his many civic involvements, Herbie was president of the St Augustine Historical Society, the Chamber of Commerce during St Augustine’s 400th anniversary celebration, the Kiwanis Club of St Augustine; and served on the inaugural board of directors of the St Augustine Lighthouse and Maritime Museum. Additionally, he was a member of the United Way, Flagler Hospital Board of Trustees, Flagler College President’s Council, FSU Alumni Association Emeritus Society, Ashlar Lodge #98, St Augustine Shrine Club, St Augustine Elks Lodge 829, and Affordable Housing Advisory Committee. He was a charter member of the Navy League St Augustine. In 2013, the St Augustine City Commission honored him with its highest award, the Order of La Florida, for service to the community, and proclaimed April 23rd, 2013 Herbie Wiles Day. Herbie organized the annual Red Cox Day from its inception in 1993 and spearheaded contributions to the Red Cox Award and Scholarship Fund at Flagler College, in honor of his good friend and St Johns County’s first recreation director, the late J Edward “Red” Cox. A community leader is recognized each spring at a Flagler College baseball game. For more than 55 years, Herbie and friends gathered for coffee weekday mornings to discuss politics and anything else. He was a loyal friend, mentor and role model to many, and a loving husband, father, grandfather and great-grandfather to his family. In addition to his parents, Herbie was preceded in death by his brothers, Randy, Jr. and Jimmy. He is survived by his wife, Annette; children Doug (Doris) Wiles and Debbie Wiles, grandchildren Lindsay (Zack) Gramana and Ashley Wiles; great grandchildren, Rex, Zoë and Daisy Gramana, and Olivia, Lucas and Mason Gregoire; and extended family. Visitation will be Sunday, October 6th, 5-7 PM at Craig Funeral Home. A memorial service will be held on Monday, October 7th at 11 AM, at Memorial Presbyterian Church, 32 Sevilla St. A reception will follow the service in the Fellowship Hall. Flowers are gratefully declined. To honor Herbie’s service to the community he loved, memorial donations may be made to Flagler College Red Cox Scholarship Fund, PO Box 1027, St Augustine, FL 32085-1027, or online at www.flagler.edu/support and direct the donation to the Herbie Wiles Memorial Gift to the Red Cox Scholarship; or your favorite local charity. It was his goal to make St Augustine a better place for everyone who lives here, and he would be pleased to know that his friends would do the same. At his passing, the staff of Herbie Wiles Insurance affixed this quote to Herbie’s office door to honor his presence in their lives: “Leaving a lasting legacy is about more than achieving great things. When you treat others well and create a reputation of integrity, you'll set a powerful example for leaders to come.”

The family of Herbert Wiles created this Life Tributes page to make it easy to share your memories.

Send flowers to the Wiles family.