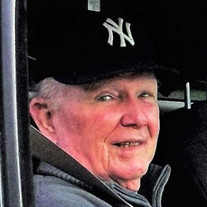 If you know Hubert James Ellis, you know him as Jimmy. Jimmy is the son of an Irish immigrant, Francis Augustine Ellis and Rita Marie Cleary of Cypress Hills then later Ozone Park, Queens, NY. His grandmother “Nanna’’ Mary Cleary Napal and her Husband Francisco Oraa Napal, were a constant source of joy in his early days. In September of 1949, he entered Bishop Loughlin High School as a freshman and lettered in three sports, Baseball, Handball and Basketball in spite of being only 5’2” at the time. His father Francis “Frank”, worked as an executive for Rupert’s Brewery. Jacob Rupert owned the New York Yankees at the time. Consequently, Jimmy’s first real job at age sixteen was selling programs at Yankee Stadium. His love for the team was unquestionable. In February of 1953, the family including his younger brother Robert moved to Seaford NY, out on Long Island. Jimmy was asked to be the chaperone of a local high school dance once. At this dance he met Barbara Bould and they later got married in February of 1957. In October of 1957 he joined the Army and did six months of active duty, then four years of Reserves. In 1958 he joined the Nassau County Police Department. Because of his education and typing skills he was quickly accelerated up the ranks to a Detective. His police work was based around the investigation of racketeering and he did quite a bit of undercover work that much of his children know nothing about. Let’s just say his family won’t donate to certain charities. Immediately after marriage, Jimmy and Barbara start having children, one after the other. First came James Francis in 1958 then Kathleen Ann in 1960, Patricia Anne in 1961, Kelli-Ann in 1962, Kerri-Ann in 1971 and Michael Patrick in 1975. In 1985 Jimmy retired from the police department and the family moved to Saint Augustine Florida. After starting a short-lived lawn care business Jimmy and Barbara found an opportunity in buying two small retail stores in the downtown Saint Augustine area. As time went on the business grew and later became the Palm Bay Republic T-shirts and casual wear stores scattered throughout Saint Augustine and Saint Augustine Beach. Jimmy often said there are only two problems in the world: “romance and finance”. The saving grace in Jimmy’s life was his participation in the program of Alcoholics Anonymous. On August 4 of 1984, Jimmy surrendered to the disease of alcoholism and maintained his sobriety all the way till the day of his passing. Jimmy’s family grew and grew. James Francis married Donna who cared for him in these last days of his life. Kathleen married Michael Sielaff and they had two children Meghan and Brendan. His first granddaughter Meghan had three children of her own, Maurade, Makenna, and Maisie. Patricia married and had Jimmy’s third grandchild Michael. Patricia later married James McNulty and two more boys entered into Jimmy’s grandparent life with Connor and Liam. Kelli-Ann remains a devoted daughter, sister and aunt who is loved by all of Jimmy’s grandchildren. Kerri-Ann married J Hartley. Together they had Camryn, Collin, Ellis and Tatum. Later in life as Jimmy’’s health started to take on some age, the Hartley family saw him through the ups and downs and humbly loved him in tremendously unconditional ways. Michael Patrick met Lauren Bitting in college. They later had two children, Trinity and Abbie. Jimmy’s family is spread out between New York, Maryland, Pennsylvania and right here in Saint Augustine, Florida. But Jimmy was never far away from any of them. In constant vigilance, he would often be heard speaking of the joy they brought him. Jimmy stuck to his Irish Catholic roots and remained a member of the Saint Anastasia Catholic Church. Where he shall forever be interned. All the family agrees that Jimmy’s participation in the program of Alcoholics Anonymous was life-changing for the entire family. In lieu of flowers, the family requests that you make an anonymous donation to https://contribution.aa.org/. For Non-AA members please donate to St. Augustine Little League P.O. Box 305, St. Augustine, Fl 32085, https://mysall.org. A visitation will be held 5 - 8 PM Wednesday at Craig Funeral Home with prayers beginning at 6PM. Funeral Mass will be 11AM Thursday at St. Anastasia Catholic Church, father Jared De Leo offficiating.

If you know Hubert James Ellis, you know him as Jimmy. Jimmy is the son of an Irish immigrant, Francis Augustine Ellis and Rita Marie Cleary of Cypress Hills then later Ozone Park, Queens, NY. His grandmother &#8220;Nanna&#8217;&#8217; Mary... View Obituary & Service Information

The family of Hubert James Ellis created this Life Tributes page to make it easy to share your memories.

If you know Hubert James Ellis, you know him as Jimmy.
Jimmy...