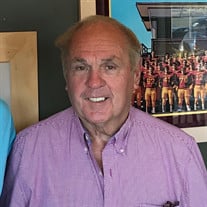 Jack Allen Spencer, 72, passed from this life on Friday, September 20, 2019 at the Bailey Family Center for Caring in St. Augustine, Florida. Jack was born June 5, 1947 in Muskegon, Michigan. He lived his formative years in Fruitport, Michigan where he was a well loved member of the small community and excelled at many high school sports. In his teen years, he resided with Mrs. Ruth Olsen and attributed much of his success in life to her love and care for him. Jack graduated from the first graduating class of Fruitport High School in 1965. He went on to pursue his college education and played collegiate football at Ferris State University (formerly College) in Big Rapids, Michigan. His 1968 squad accomplished the ultimate season finishing undefeated and were later inducted into the University’s Hall of Fame in 2017. After completing his college degree, Jack relocated to Jacksonville, Florida for an opportunity to teach and assistant coach football at Sandalwood High School. Not long after, he was asked to switch gears and take on coaching the schools baseball team. That was the beginning of a long and distinguished career, as Jack had found his professional purpose. Over his 30 plus year career as an educator and coach, he spent time at Sandalwood High School, Englewood High School, Paxon High School and Arlington Country Day School, all in Jacksonville. From 1971 to 2004, Jack had close to 600 wins under his belt, was inducted into the Florida Athletic Coaches Association Hall of Fame, won two back to back state championships in 2000-2001 and was named National High School Baseball Coach of the Year. Beyond the athletic accomplishments, he touched the lives of countless students, athletes and other coaches, impacting their lives in profound ways. Upon his retirement, Jack, his wife Ruthie and daughter Keri moved to Satsuma, Florida where they enjoyed the remainder of their life together with their friends and family. Jack and Ruth were the biggest supporters of their son Blake’s racing career and followed his race team around the country as often as they could. Jack served as an advisor to the entire team, both professionally and personally, and was a fast friend to anyone who he may cross paths with at the track. Jack is preceded in death by his parents, Charles Brownell Spencer and Eva Alberta Moore Spencer and brothers Charles Spencer (Rosemary) and Nicholas Spencer. He is survived by his loving wife of 47 years, Ruthie Spencer, son Blake Spencer, daughter Keri Spencer, grandson Austin Rivero, granddaughters Kaylynn Rivero and Peyton Spencer, sisters Dolly Gould (Tom), Bonnie Rance (Mickey)and Debi Spencer and brother Robert Spencer (Joyce). A memorial service will be held at the St. Augustine Rod and Gun Club main house on Friday, September 27th at 11:00 a.m. and an additional service is being planned in Fruitport, Michigan at a date to be determined in October. In lieu of flowers, the family invites you to make a donation to St. Augustine Youth Services in memory of Jack’s lifelong commitment to youth.

Jack Allen Spencer, 72, passed from this life on Friday, September 20, 2019 at the Bailey Family Center for Caring in St. Augustine, Florida. Jack was born June 5, 1947 in Muskegon, Michigan. He lived his formative years in Fruitport, Michigan... View Obituary & Service Information

The family of Jack Spencer created this Life Tributes page to make it easy to share your memories.

Jack Allen Spencer, 72, passed from this life on Friday, September...

Send flowers to the Spencer family.