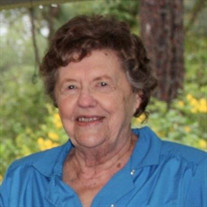 Jacoba (Jackie) Wilberta Smith passed away peacefully surrounded by her loving family on June 23, 2019. Born January 18, 1934, she was the daughter of John and Jacoba (Jans) Kleene. She was raised in Sioux Center Iowa. Second of 8 children, she left school in the eighth grade to help her mother raise her siblings while her father worked as a welder. At the age of 21 she met Ralph Austin Smith, a dashing young United States Marine, fresh out of boot camp and on July 5, 1955, they married in Sioux Center Iowa. Jackie and Ralph were the parents of Ralph J., Randy (deceased as an infant), Bradley, Diana, and Terry. Ralph’s career as a Marine took the family all over the US. Jackie was a loving and caring mother who not only raised a family with Ralph, but as the wife of a Marine she often had to take the roles of both father and mother as Ralph was often stationed outside of the US. Jackie helped to support her family by taking on available jobs at each new location including seamstress, waitress, cook and baker. Moving was a way of life for her and Ralph as the Marine Corps transferred him from one location to another. Her toughest time was when Ralph was stationed in Vietnam, during which she spent that 13 months writing letter after letter and making voice tapes to him with messages from her and the children. When Ralph retired from the Marine Corps, they lived in northwest Iowa and finally settled in St. Augustine, Florida. Jackie’s greatest joy in life was her love for her family with whom she always put first. Her pride was in seeing all of her children graduate college and raise their own families. She enjoyed cooking, family gatherings, playing the organ, and playing cards with her husband, kids, and grandkids. Everyone looked forward to her cookies, cakes, and especially her pies. She even enjoyed spending and winning a little money at the casinos which none of us could ever figure out how she always seemed to come out ahead. Jackie is survived by her husband Ralph of 63 years, her three sons, Ralph J. Smith (Donna, deceased) of Walford, Iowa; Bradley J. Smith (Marlene) of Urbandale, Iowa; Terry L. Smith (Julie) of Urbandale, Iowa; and a daughter Diana L. Oliver (Radamés) of Jacksonville, Florida. Her surviving siblings include Arlene Smit (Howard), of Hull, Iowa and Robert Kleene (Ileta) of Charlotte, North Carolina and many grandchildren, nieces and nephews. In addition to her parents, preceding Jackie in death is an infant son Randy, two sisters, Betty Urban (John) and Mick Marra (Wayne), and three brothers, William Kleene (Caroline), Gerald Kleene (Shirley), and Leroy Kleene (Dorothy). In lieu of flowers, memorial donations may be made to Community Hospice & Palliative Care Foundation, 4266 Sunbeam Road, Jacksonville, FL 32257.

Jacoba (Jackie) Wilberta Smith passed away peacefully surrounded by her loving family on June 23, 2019. Born January 18, 1934, she was the daughter of John and Jacoba (Jans) Kleene. She was raised in Sioux Center Iowa. Second of 8 children,... View Obituary & Service Information

The family of Jacoba "Jackie" Smith created this Life Tributes page to make it easy to share your memories.

Send flowers to the Smith family.