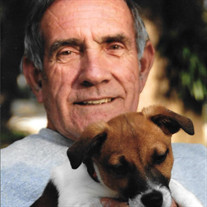 James H. Colvin Jimmie Colvin was born in St. Augustine to Catherine Masters Colvin and James Colvin Sr. on February 10, 1943. He passed away on August 17, 2021 at the age of 78. He was surrounded by his loving family. He will be deeply missed and will never leave our hearts. A Funeral Mass will be held Saturday, August 28, 9:00 a.m. at the Cathedral Basilica of St. Augustine. Prosession to San Lorenzo Cemetery. He is survived by his wife, Eileen, children, Timothy Colvin (Kellie), Lee Colvin (Becky), Don Kalapp (Dea), Jason Kalapp, Sean Kalapp (Miriam), grandchildren, Brooke(Triston Lee), Eleah, Nicole, Jeffrey(predeceased), Kobe, Sebastian, baby girl due in October, sister, Margaret Janson (Richard), nephews, Chris and John, neice, Karen (David) Steiner, mother-in-law Eileen Parry, sister-in-law Pep Worthington (J.R.), brother-in-law Don Parry (Jeannie), brother-in-law Rob Parry(Sue), and many neices and nephews. He also had an extended family, too many to mention, but you know who you are and how he loved you all. Jimmie graduated from St. Joseph Academy in 1961. During his years in school, he was a Sacristan and would serve at mass before school, as well as the other duties that were involved throughout the year. He was a man of faith and devotion. After retirement, he was on the team at the Rectory who were in charge of the money counting, check copying, and the job it entailed. You could find him on those mornings with his friends enjoying coffee and an apple fritter at the Bunnery on St. George Street! He was unable to continue due to health reasons and he really missed it. Jimmie loved visiting with the wonderful women in the office! He was well known around St. Augustine as the best painter with great knowledge and expertise. Jimmie went to work for the Florida School for the Deaf and the Blind in the maintenance department starting as a painter, then maintenance mechanic in the carpenter shop doing skilled work in painting, sheetrock, plaster, masonry, concrete, operated a variety of shop equipment and many other skills. He then became the Maintenance Supervisor when Ed Parry retired. After this he was asked by the Business Office to be the Acting Maintenance and Construction Superintendent until advertisement and selection was completed. Jimmy was then asked to take a position as the Transportation Supervisor and was in that position until he retired with 25 years of service. Over the years, he enjoyed doing jobs with his buddies around town and they always had a good time! Jimmie enjoyed teaching and helping others, especially Travis Lane, with his knowledge, skills and workmanship. He would get numerous phone calls with questions about how to do something, what to use, etc. He had a talent and a work ethic that was admired by everyone. St. Augustine has many fishing tournaments and Jimmie Colvin was very well known for his winning fish! Of course, he and his buddy, Michael Oliver, had many secrets to their continual success. When asked what the secret was, they would say "Chocolate milk and Sweet 16 powdered donuts"! They always had a good day but when they won, it was spectacular! So many trophies, great prize money, and the fun seeing their names on the top of the board! Hunting was another passion of Jimmie's and he had many years of enjoyment in the woods. He loved going hunting with his buddies and son Lee. Later, after Lee married Becky, they had family hunting trips that he cherished. And, as a young man, he was active in many things within the local community. One being the Commodore of the Boating Club 1973-1974. Everyone still comments on the photo that is on the wall with the many others who held that title. It is, "Wow, look at that hair, and boy was he good looking"! There will be a Gathering for family and friends, at the St. Augustine Shores Club, Main Hall. Flowers are gratefully accepted or you can make a donation in his honor to the Cathedral Basilica of St. Augustine. We would like to thank all of his doctors in St. Augustine who took care of Jimmie over the years. Dr. Gregory Gibson, Dr. Ferris George, Dr. Mirna Barakat, Dr.Bernard Borbely, and all who may not have been mentioned. Also, most recently, Dr. Marc Warmuth of Cancer Center of North Florida, and his very caring and sincere staff, especially Vanessa, Denise, and Heather. You can view his Funeral Mass on the website, Live Streaming, at: www.thefirstparish.org

James H. Colvin Jimmie Colvin was born in St. Augustine to Catherine Masters Colvin and James Colvin Sr. on February 10, 1943. He passed away on August 17, 2021 at the age of 78. He was surrounded by his loving family. He will be deeply missed... View Obituary & Service Information

The family of James Jimmie Colvin created this Life Tributes page to make it easy to share your memories.

Send flowers to the Colvin family.