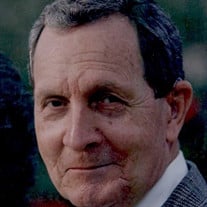 "Jimmy" James Edward Rogers, Sr. devoted husband, amazing father, grandfather, and friend, took his final journey home to be with his beloved "Honey" (Christine), and his Savior on Easter Sunday April 4, 2021.  He was born in Jacksonville, Florida in 1928, where he resided for 93 years. He entered the U.S. Army in 1946, serving in the 82nd and 11th Airborne as part of the occupying forces in Japan. After returning home to Jacksonville, he married his Sweetheart, Christine in 1949; a marriage that endured for 71 years. He worked for the City of Jacksonville Electric Department as a Supervisor, was a member of the Duval County Sheriff's Posse, and was the owner of Rogers Patrol and Guard Service until he became the Superintendent of the DuPont Estate (Epping Forest) until retiring in 1979. He was a member of the Masonic Order for forty­one years, achieving the title of Master Mason in 1960. A wonderful father, grandfather, great-grandfather, and great-great-grandfather he leaves behind to carry on his legacy: 6 children: James E. Rogers, Jr. (Pam Rogers), Cheryl Tobin (Larry Tobin), Sharon Strother, Karen StaffordBiggs (Rick Biggs), Jonathan Rogers (Shelley Rogers), Cynthia Davis; 11 grandchildren: Jordan Rogers, Brandon Rogers, Troy Stephens, Tra-ci Roberts, Travis Knight, Timothy Strother, Joshua Stafford, Justin Rogers, Kyle Rogers, Jenna Rodriguez, Cristin Glover; 14 great-grandchildren, 3 great-great-grandchildren. He also leaves behind a loving sister Catherine Olivia. He is predeceased by his wife Mary Christine Rogers, his father Jay G. Rogers, SR, his mother June Irene Davis, his brother Jay G. Rogers, JR, his sister Jackie Springer, and his grandson Caleb Leslie Spinks. An avid outdoorsman and handy man, he provided us with many adventures and a lesson to go with each. He taught us so much. He taught us to love {I Corinthians 13), to work hard and never give up, to always trust in God {Proverbs 3:5,6), and that we always have a friend in Jesus. He wrote a beautiful song, "Count Your Blessings As You Pray" which was subsequently recorded and sang by Larry Mangum. Our Dad, Our Hero, Our Friend, clung to the Old Rugged Cross and has now exchanged it for a crown. We love you and will meet you again in Glory. Flowers are gratefully accepted or those wishing may make a donation in his memory to the Shriners Hospital for Children. https://www.shrinershospitalsforchildren.org/shc/donate

"Jimmy" James Edward Rogers, Sr. devoted husband, amazing father, grandfather, and friend, took his final journey home to be with his beloved "Honey" (Christine), and his Savior on Easter Sunday April 4, 2021.  He was born in Jacksonville,... View Obituary & Service Information

The family of James Edward Rogers Sr. created this Life Tributes page to make it easy to share your memories.

Send flowers to the Rogers family.