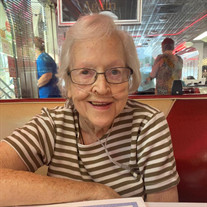 Jean Martha Coates of St. Augustine, Florida peacefully passed away on January 15th, 2022 at the age of 94. Jean was born on July 5th, 1927 in Williamsport, Pennsylvania to parents Lester and Statia Sell. Jean worked for Post Engineering in Fort Meade, Maryland from 1945-1962 as a secretary. She continued on as a legal secretary from 1964-1966 which was followed up by another secretary stint at Fort Meade Credit Union. Her most notable secretary position was at Harundale Presbyterian Church where she had been a member since 1949. She was hired by Rev. Bower as a part-time secretary in 1970 which he held as the best decision he had made for the church and continued working there until 1990. Jean married Richard Thomas Coates (Dick) in July of 1990 and moved to Lady Lake, Florida. They enjoyed soaking up the sunshine during their retirement and were very active in their community. They enjoyed traveling to visit family, various trips, and having people come to visit. After Dick’s death in 2003, Jean moved into The Pavilion at Bayview, St. Augustine, FL. She was very involved at Bayview, becoming the resident council president and the activities director. She remained active even after resigning from her positions as her eyesight worsened. She loved her family at The Pavilion and was loved by all of the residents and staff. Jean was known for her quiet disposition, but always put others needs above her own and made sure everyone was taken care of. Her faith was evident to all who met her and she will leave a lasting impression on everyone she leaves behind. Jean was greeted in Heaven by her late husband Richard T. Coates (1922-2003), her parents, her siblings Murray, Carl, Harold, and Bob, and her daughter Linda White. She is survived by her granddaughter Kristin White; her nieces and nephews, Paula Garrett (Wes), Statia Connett (Scott), Dan Sell (Peg), and Les Sell; her step-children, Pat Coates, Peggy Coates (Bob), Tim Coates (Doreen), and Nancy Boyd (Dave); her grandchildren, Neil Cramblett (Mary), Stephanie Summerville (Dan), Amy Feldman, Laurie Feldman, Jessica Triandos, and Elizabeth Coates; and her great-grandchildren, James Cramblett, Danny Summerville, and Stephen Summerville. Additionally, she is survived by many extended family members, including her family at The Pavilion at Bayview. A memorial service will be held at Harundale Presbyterian church in Glen Burnie, MD at a later date this spring. In lieu of flowers, the family would like donations made payable to: St. Johns County Welfare Federation and should be mailed to The Pavilion at Bayview, 161 Marine Street, St. Augustine, FL 32084. Donations can also be made through bayviewhealthcare.org. Please ensure that any checks or online donations specify the donation is in memory of Jean Coates.

Jean Martha Coates of St. Augustine, Florida peacefully passed away on January 15th, 2022 at the age of 94. Jean was born on July 5th, 1927 in Williamsport, Pennsylvania to parents Lester and Statia Sell. Jean worked for Post Engineering in... View Obituary & Service Information

The family of Jean M Coates created this Life Tributes page to make it easy to share your memories.

Send flowers to the Coates family.