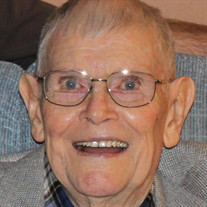 Jesse Joy Hart, 92, of St. Augustine, Florida, a fourth generation Florida pioneer, made it home Saturday evening, March 28, 2020, to make sure he was on time for his first Sunday in heaven. Born January 8, 1928, in Madison county to parents Martha Ethel (Mims) and Jesse James Hart, he was the 7th of 8 children and his momma's baby boy. His three oldest siblings died early in life. But he and his other siblings, two brothers and two sisters, as children of a farmer, learned about work early in life. Jesse's parents, both Christians, taught him the values of hard work, responsibility, and gratefulness. In his family, you received your first pair of new shoes when you began grade school. And Jesse attended grade school in Clayland, Florida, until Christmas of his 8th grade year, at which time he left school to help on the farm. Thanks to a caring teacher, he was given the opportunity to take and pass the 8th grade final exam at the end of the year. That became quite important later as having that 8th grade certificate allowed him to earn his GED as a young adult parent. He worked numerous jobs in his life, from hauling watermelons and harvesting cypress, to working in a feed mill and phosphate plants. He served in the US Army during WWII, running a vehicle repair shop in Guam. After a short stint with Lobrano Machinery, he began a career with St. Regis Paper Co. in Jacksonville, Florida as a heavy equipment mechanic. The last 17 years with St. Regis were spent in Monticello, Mississippi, retiring as a millwright-machinist in 1983. The most important things in Jesse's life were his service to God and his family. Rarely doing anything for himself, he spent his time and effort on his family. He loved taking his family fishing and camping and loved cooking for people, especially his grandchildren. He loved building go-karts for his children and grand-children and built many of them and also was a self-trained genealogist. He believed in personally witnessing to others of the saving grace of Jesus Christ and continued visiting folks well into his late 80s, sharing his faith. As age diminished his eyesight and ability to walk, he continued to meet with his prayer partner of two decades, Rick Powers, every week to pray individually for the needs of dozens of people. And, when he could no longer read his bible, he still attended church every time the doors opened thanks to the dedicated efforts of his very special friends Patricia and Mike Manucy. His witnessing did not stop, even after he moved into assisted living. Jesse was predeceased by his parents, siblings, his wife of 52yrs Peggy Henderson Hart, and son-in-law Paul Lodrick Whatley. He is survived by his children Jesse Timothy (Sheila) Hart, Jack Lamar Hart, Lenora Jill Whatley, and James Lanier (Rena') Hart, grandchildren Christopher Paul Hart, Paul Michael Edward Whatley, Jessica Lynn (Michael) Mangefrida, Stephanie Rena’ (Bo) Bozard, Allison Layne (David) Edwards , Natalie Cheri (Aaron) Braddock, Jonathan Lloyd Hart, and Stephen Lane (Courtney) Whatley, and great-grandchildren Hunter Emilee Mangefrida, Wyatt Jeffrey Mangefrida, Kylee Lane Mangefrida, Aubree Lynn Mangefrida, Harrison Ryder Bozard, James Woodrow Bozard, Reece Calhoun Bozard, Cutler James Braddock and Hayden Lane Whatley. The family extends thanks and gratitude to the staff and medical professionals at Coral Landing Assisted Living, St. Augustine VA Clinic and Flagler Hospital, Dr. Ferris George and his staff, especially Billie and Jennifer, and Dr. Warren Whitlock and his staff. Special thanks to Rick and Natalie Powers, Patricia and Mike Manucy, Karen Cannon, Ashliegh Carter, and Lori Dukes and family, all who treated Dad as their own. Craig Funeral Home is in charge of the arrangements. Due to the current Covid19 environment, the family will have a private graveside service. In lieu of flowers, donations can be made to Moultrie Baptist Church, 3699 US-1 South, St. Augustine, FL 32086 or to your own church. Jesse, Dad, Papaw, Da - "Well done, thou good and faithful servant", Matthew 25:21.

Jesse Joy Hart, 92, of St. Augustine, Florida, a fourth generation Florida pioneer, made it home Saturday evening, March 28, 2020, to make sure he was on time for his first Sunday in heaven. Born January 8, 1928, in Madison county to parents... View Obituary & Service Information

The family of Jesse Joy Hart created this Life Tributes page to make it easy to share your memories.

Send flowers to the Hart family.