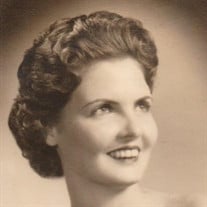 Joanne Ethel (Redmond) McElroy, 87, died Wednesday, September 23, 2020 at home, surrounded by family. Joanne was born and lived almost all of her life in St. Augustine, Florida. After graduating from St. Joseph Academy she went on to complete nursing school at St. Vincent’s Hospital in Jacksonville, Florida. As a Registered Nurse she worked in a number of positions including five years as a medical office nurse, a year as an infirmary nurse at the Florida School for the Deaf and Blind, and at Flagler Hospital she served four years as staff nurse in most departments, followed by nine years as a Hospital (Shift) Supervisor. She served as the initial Administrator / Director of Nursing for Community Health Services at St. Augustine General Hospital and then completed her career as the Administrator / Director of Nursing at Community Home Health Care of Flagler Hospital. In addition to her nursing career, she served as President and manager of the family real estate holding corporation for about thirty years after the death of her husband Donald. During her retirement she was able to travel extensively with friends and family, including visiting Europe several times, traveling throughout the US including visits to Alaska and Hawaii, cruising in the Caribbean, and visiting her daughter and son-in-law while they were stationed in Australia. She also continued to maintain contact with her fellow retired nurses, and volunteered at the St. Johns County Health Department. She is survived by children Frank McElroy (Sarah) of St. Augustine, John McElroy of Green Cove Springs, Rebecca Ammann of Bryson City, NC; and Josie McElroy (Dave Cox) of St. Augustine; her sister Marion Cox (Larry) of Melrose, FL; her grandchildren, Savannah McElroy, Keith Ammann, Heidi Ammann, and Allen Cox. Also surviving Joanne are her sisters-in-law Audrey Redmond and Ann Redmond, numerous nieces and nephews, and their extended families. Those preceding her in death include her husband Donald McElroy, sister Barbara Channell, brothers Tom Redmond, Larry Redmond, John Redmond, and William “Billy” Redmond. A funeral mass will be held on Saturday, October 3, 2020 at 10:00 AM at the Cathedral Basilica of St. Augustine, followed by graveside services at San Lorenzo Cemetery. Craig Funeral Home is in charge of arrangements.

Joanne Ethel (Redmond) McElroy, 87, died Wednesday, September 23, 2020 at home, surrounded by family. Joanne was born and lived almost all of her life in St. Augustine, Florida. After graduating from St. Joseph Academy she went on to complete... View Obituary & Service Information

The family of Joanne Redmond McElroy created this Life Tributes page to make it easy to share your memories.

Send flowers to the McElroy family.