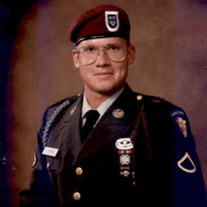 Dennis Joel Lehmann, Jr., 56 ,of Saint Augustine, Florida passed away peacefully on May 30, 2022 at Haven Hospice Care Center in Palatka, Fl.  Joel was born in Jacksonville, Fl on August 27, 1965 and grew up in Banner Elk, NC and Blountville Tn.  Joel received his Bachelor of Fine Arts Degree from Ringling School of Art and Design in Sarasota Fl in 1988. After graduation, Joel worked as a custom picture framer and sculptors assistant. In 1989 Joel enlisted in the US Army Infantry and spent the next 2 1/2 years as a paratrooper in the only American Airborne Battalion Combat Team in Europe.  During that time, Joel was proud of his accomplishments as a draftsman where he worked directly for the commanding officer of the unit where he was based in Vicenza , Italy from 1989-1992 . During those years his team  also served on multiple missions to Turkey and Iraq during the first Iraq War. After receiving an honorable discharge upon completion of his four year enlistment, Joel devoted most of his time to producing art,which in Joels own words he described as "paintings, assemblages, collages, and mixed media".  When Joel wasn't working on art he enjoyed the ocean, surfing, skateboarding, and helping others.  Those who knew Joel as a friend understood his kind loving nature. In all his work, Joel displayed a quiet competence and attention to detail, for those are the traits of a master craftsman and artist. Joel is survived by his mother, Sherry, and his brother, Mark, his brother  Paul and wife Fabiana ,  Aunt Marty,  and Uncle Ron , nieces and nephews, and dear cousins that he cared for deeply. May we all gain peace and understanding about Joel from these words which he had written. " I see a pattern in nature that I find intriguing. From chaos comes some kind of order. It is like a circle being made.   It is like life and death. Living things as well as the intangible are merely transformed into a new form of energy. This transformation is inevitable. The death of one means life to another. From the smallest microscopic organism to the largest star in space, the pattern is basically the same; pulsating and vibrating and always changing. This is what I see is beautiful in life. I strive to reflect that." A memorial service will be held at 11:00am on Friday June,17,2022 at Jacksonville National Cemetery. In lieu of flowers, please consider making a memorial donation online or by check to DAV – Disabled American Veterans P.O. Box 14301Cincinnati, OH  45250-0301.

Dennis Joel Lehmann, Jr., 56 ,of Saint Augustine, Florida passed away peacefully on May 30, 2022 at Haven Hospice Care Center in Palatka, Fl.  Joel was born in Jacksonville, Fl on August 27, 1965 and grew up in Banner Elk, NC and Blountville... View Obituary & Service Information

The family of Joel Lehmann Jr created this Life Tributes page to make it easy to share your memories.

Send flowers to the Lehmann family.