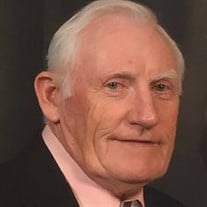 John Anthony Carey (83) of Jacksonville, Florida left this earth for a better place on May 6, 2019. He was born in Kilkenny, Ireland to Martin and Georgina Carey on November 15, 1935. John immigrated to New York when he was 18. Always a hard worker, John went to night school for 12 years while working full time and raising his children to make a better life for his family. He graduated from New York University with a degree in Electrical Engineering. He worked numerous jobs leading up to his lifetime career at Western Electric/AT&T. He was a loving husband for 60 years to Grace and an amazing father to Brian (Dana), Donna, Danny (Antoinette), John (Jacqueline), Karen (Petri), David (Megan), and Trisha (John). He adored, loved and entertained his 14 grandchildren and they him. Grandpa is already missed by Alanna, Eric, Brendan, Grant, Garrett, Becca, Jacob, Chase, Grace, Jadyn, Conor, Patrick, Tyler and Kaiden. John is predeceased by his parents and brothers, Gus, Noel and Paddy and survived by his brother Michael and sister Marie. His many nieces and nephews will always be blessed to have had him in their lives. John was an avid golfer, who once shot a hole in one. His sense of humor was among his best attributes as anyone who had ever met him could attest. Soccer meant a lot to him, and he shared his knowledge and passion with all those he coached and mentored throughout the years. His faith and devotion to God and the Catholic Church was an inspiration to all who knew him. The manner in which he lived his life exemplified what it was to be a Christian. While spending many years instructing the tenets of Catholicism to the youth of his parish, he laid a foundation for his students that they could build on throughout their lives. He taught CCD to various ages, but the years he taught to high school teens in his home greatly impacted those he taught, in that years later they would come to him and his wife and express how it was the best CCD years of their religious education. He was a person who was loved by everyone who met him and will be missed by all. The viewing will be held on Friday, May 10th from 6 – 8 pm with prayers beginning at 7:00pm in the Marian Center in St. Joseph Catholic Church, 11757 Old St. Augustine Road, Jacksonville. The Funeral mass will be celebrated on Saturday, May 11th at 11:30 am at St. Joseph Catholic Church. Reception will follow at the Cody Enrichment Center, 4152 Loretto Road, Jacksonville. In lieu of flowers the family requests donations be made to Oblate Missions (in memory of John Carey) at 323 Oblate Drive, San Antonio, TX 78216.

John Anthony Carey (83) of Jacksonville, Florida left this earth for a better place on May 6, 2019. He was born in Kilkenny, Ireland to Martin and Georgina Carey on November 15, 1935. John immigrated to New York when he was 18. Always a hard... View Obituary & Service Information

The family of John Anthony Carey created this Life Tributes page to make it easy to share your memories.

Send flowers to the Carey family.