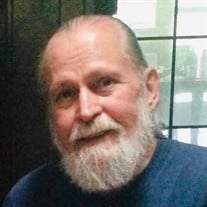 John Charles Perretti was born on August 7th, 1947 in Manhattan, NY. He passed peacefully at home in Saint Augustine, FLA on March 23, 2021 with his loving family around him and under the care of Hospice angels. While New York and Florida were the bookends of his life, there were many beautiful chapters of adventure, love, spirituality, great friendships, and family celebrations in between. John was the oldest of three children born to John Perretti, Sr. and Melanie (Remele) Perretti in Manhattan, New York. He is survived by his wife, Cathryn and three daughters, Jen Sherman (Dave Sherman), Jamie Williams and Jill Martay (Drew); his brother, Robert Perretti (Jill); and his grandchildren: Max Sherman, Hayden Martay, Matthew Williams and Logan Martay. He considered his dearest four grandchildren the light of his life. John attended Archbishop Stepinac High School in White Plains, New York. He obtained his undergraduate degree from the University of Detroit, followed by his Masters from New York University (NYU). He raised his daughters during their early years in a little red house in the woods in Valhalla, NY. He raised them to be adventurous like him, with a love of both nature and the city. He shared his passion for nature walks with his daughters and ventured out with them crossing over frozen reservoirs during the winter months. Some of the best memories are from him teaching them all about survival skills in the woods and exploring New York City streets and sights together. He loved his sports – whether a live Mets game where he broke his vegetarian diet to delight in a hot dog with a cold beer, or watching the Giants or Jets football games on TV. As an avid music aficionado you could hear his favorites; Bruce Springsteen, The Beatles, Pink Floyd, Cat Stevens, James Taylor and many other 60’s and 70’s rock bands coming from his car speakers or his stereo while he made his famous omelettes on Sunday mornings. He was a deep thinker, philosopher and excellent story-teller. A talented photographer, fierce backgammon competitor and family game night host, a math expert, fixer of all things (from Cars to kitchen sinks), muffin pizza chef, road trip planner and wiffle ball pitcher. The list could go on and on. He later moved to Greenwich, CT after meeting the love of his life, Cathryn Bond whom he married in August 1991. In 1993, John and Cathryn moved to Milford, CT to be near Cathryn’s beloved mother, Ellen Pinn and where John delighted in his new favorite pastime of kayaking on the Housatonic River. They enjoyed gardening, SCUBA diving, trips to the islands (Dominica in the Caribbean being their favorite) and reading. As an avid reader, John could plough through 800-page books in no time. He followed the spiritual teachings of Kirpal Singh, and practiced early morning meditations, yoga and tai chi. John started his career as a probation officer for Renaissance. In the height of his career, John worked for IBM and later found his dream job in IT working for Lockheed Martin’s Sikorsky Aircraft in Milford, CT while teaching technology classes at Eastern Connecticut State University. In his final years, John enjoyed the quiet life with Cathryn in their Saint Augustine home, where he grew his Bamboo 30 feet high and brought his love of nature to his front door with plants, animals and birds. He spent a lot of time with his nearby grandson, Max, who was able to give him a ride in his new jeep, just weeks before his passing. Thanks to technology, he facetimed with his out-of-state grandchildren – Hayden, Matthew, Logan every week. A celebration of John’s life will be announced which will be made available to his many dear friends and family on Zoom. Follow up celebrations will be held in the New York Area in the coming Summer & Fall. For more information, please contact: Jill Martay - 415-847-7673 [email protected]

John Charles Perretti was born on August 7th, 1947 in Manhattan, NY. He passed peacefully at home in Saint Augustine, FLA on March 23, 2021 with his loving family around him and under the care of Hospice angels. While New York and Florida were... View Obituary & Service Information

The family of John Charles Perretti created this Life Tributes page to make it easy to share your memories.

John Charles Perretti was born on August 7th, 1947 in Manhattan,...

Send flowers to the Perretti family.